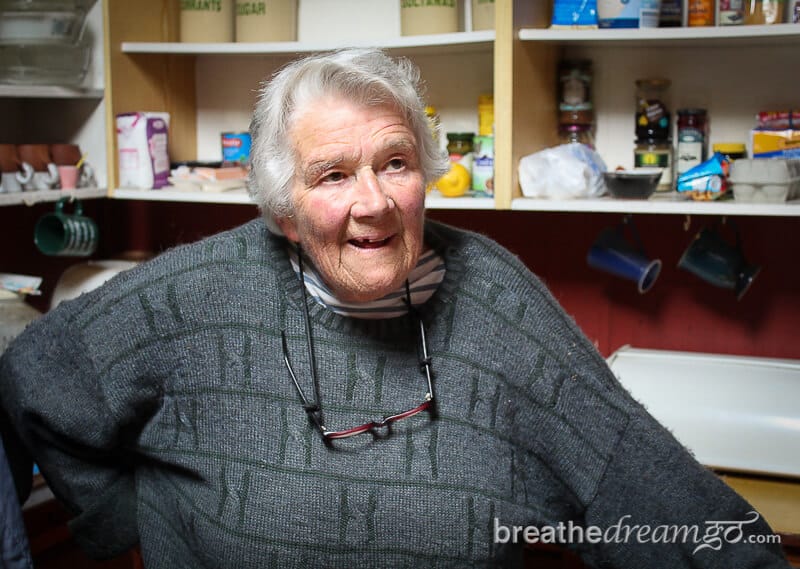 Dervla Murphy at home in her kitchen in Lismore, Ireland

WOMEN AND ADVENTURE. Those are two words that I didn’t hear a lot growing up. I was born at a time when the “women’s movement” was just starting, and women were largely hampered by very restrictive societal roles. But not all. There have always been adventurous women who swam against the tide, such as the female explorers I wrote about it this post. And Mirabai, a 16th century poet-saint in India. I wrote a five-part series about her after walking in her footsteps on the Mirabai Expedition.

So when I was approached to be part of the Women in Capes campaign, by Expedia Singapore, I was thrilled and honoured to be considered an inspiring female traveller. I remembered that when I was five years old, I wanted to be Micky Mouse. I pinned a towel to my shoulders as a pretend cape. This was at the time my Mother said I could be anything I wanted. So I wished as hard as I could to be Mighty Mouse!

In a way, I got my wish. I got to be what I wanted, a traveller and travel writer. And as such, I also get to meet other inspiring women. Like Dervla Murphy. 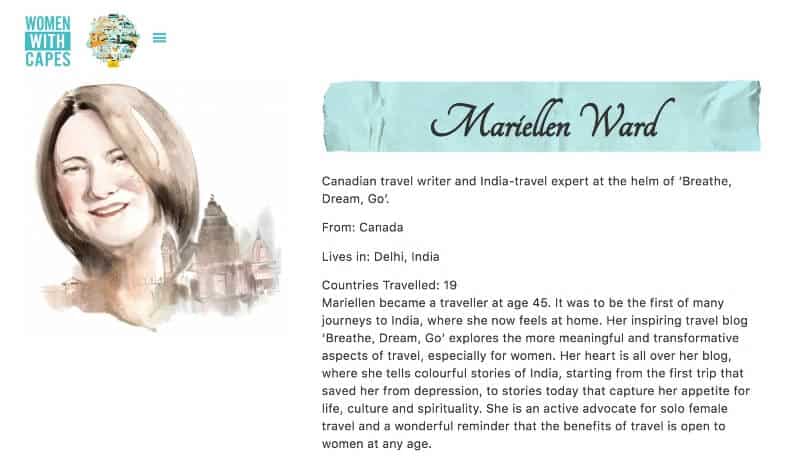 From Dublin to Delhi by bike

In 1963, at the age of 32, Dervla got on her bicycle, Roz, and rode from Dublin to Delhi. She wrote a rollicking page-turner about her adventures called Full Tilt, which was published in 1965. 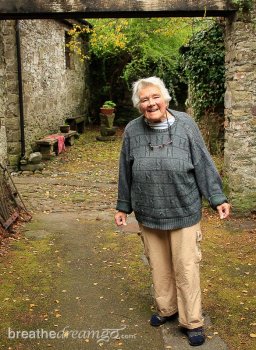 Dervla Murphy welcoming me to her home

The tale is tall, with stories about fending off wolves and men with her pistol, braving blizzards and snakes, and suffering accidents and broken bones. I counted about four times she faced mortal danger. But of course it’s also full of insight, and lyrical passages about the beauty she found, the connection she felt with Afghanistan, a country she loved, and the wonder and joy of someone having a big adventure, and discovering the world for the first time.

Published in 1965, it was the first of about 40 books of travel adventures she’s written. Full Tilt was the one that really spoke to me, perhaps because I related to finally being released for adventure and diving into the deep end of the pool. Though what I did was not nearly as ambitious, it was still a big jump for me to embark on a six-month journey across India when I was 45, having never really travelled, and in the throes of recovering from intractable grief.

When I was starting out as a travel writer about nine years ago, I read Full Tilt and became an avid Dervla Murphy fan (read my review of Full Tilt here). I started reading her other travel books, especially the ones that took place in India. So when I went to Ireland several years ago, I reached out to her publisher and arranged to meet and interview her, in her eccentric home in a former market, in Lismore, County Waterford.

The number one question I had on my mind when preparing for my interview with Dervla Murphy was about overcoming fear. I could barely conceive of a young woman, who had never been out of Europe, undertaking such an incredible journey.

All I could think about, while driving to Lismore to interview her was: how did she overcome the fear, and get up the courage, to undertake such a perilous journey?

But Dervla’s answer to my question about fear surprised me, and I’ve thought of it many times since that day. 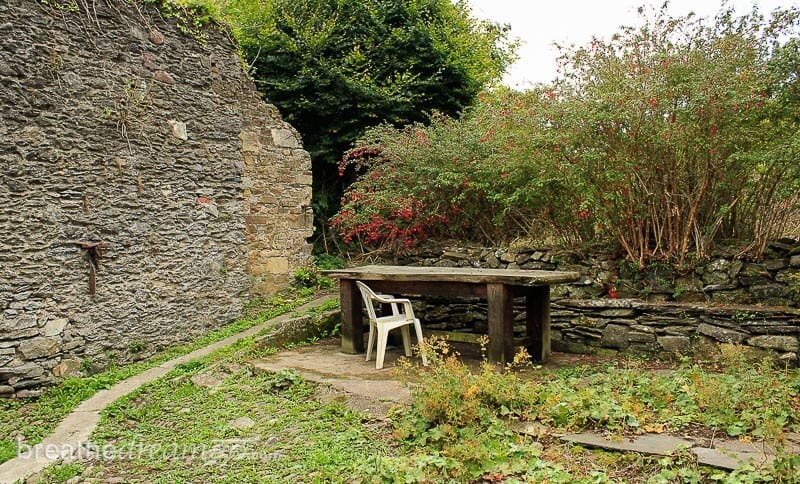 Fear and courage for female travellers

As I ineptly steered my rental car along south Ireland’s narrow roads to reach the small town of Lismore, I kept thinking about fear and courage. And about her journeys, both personal and professional.

Dervla was always an avid cyclist, but she had been confined to her native Ireland all her adult life due to aging and unwell parents. 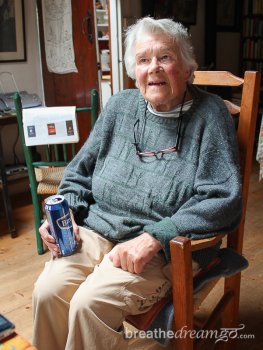 “For my tenth birthday my parents gave me a second-hand bicycle and Pappa [her grandfather] sent me a second hand atlas. Already I was an enthusiastic cyclist, though I had never before owned a bicycle, and soon after my birthday I resolved to cycle to India one day. I have never forgotten the exact spot, on a steep hill near Lismore, where this decision was made. Half-way up I rather proudly looked at my legs, slowly pushing the pedals around, and the thought came “If I went on doing this for long enough I could get to India.”

Dervla’s parents died when she was in her very early 30s. After they died, and she was free from obligation, she put her soul in a crossbow and fired. A year later, armed with a pistol and a man’s bicycle named Roz, she set out on her journey to cycle from Dublin to Delhi.

I drove over the River Blackwater, passed Lismore Castle, reached the centre of Lismore town in one piece, and found a parking spot. I had Dervla’s number and called her, and she said she would come and meet me at the car. And there she was, striding towards me in an over-sized sweater, full of warmth and vigour, as she motioned to follow her. We walked up an unremarkable lane that I would never have noticed, through an iron gate in an old stone wall topped with flowers and foliage, and into her eccentric home.

Dervla lives in what used to be the Lismore market, a collection of old stone buildings around an open courtyard. You have to go outside to get from room to room. Her study, with the walls lined floor-to-ceiling with books, is said to date from the 17th century. Dogs and cats have the run of the place, which has a homely, ramshackle, and surprisingly private feel to it. And though it would not be comfortable for most people, she loves it, despite being 82 at the time of the interview. (She was born November 28, 1931.) 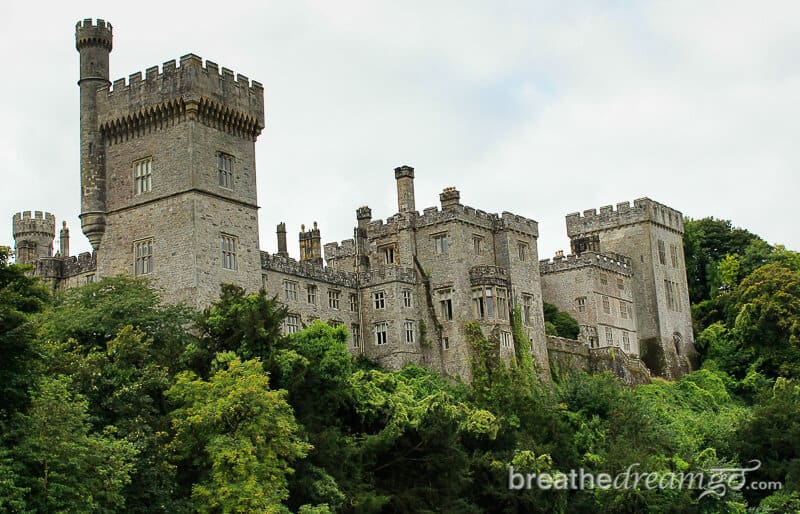 We sat down at the table, also piled with books and papers, and the first thing she did was offer me a beer. One of those thick, dark stouts they like so much in Ireland. I declined the beer, but accepted tea, which she made in her small kitchen. As I looked around, I saw many signs of a life well lived. Cards, invitations, and letters scattered all over the overflowing bookshelves, photographs of her daughter Rachel are framed on the walls, and a Tibetan flag draped over her typewriter. Since the time of Full Tilt, Dervla has been a supporter of the Tibetan cause, and she volunteered with the Tibetan community in India.

Dervla and I spent the next hour or two chatting, drinking beer (her) and tea (me) about travelling, writing, and navigating the world as a single, motherless woman. As we talked, I realized we have a lot in common – including making India the destination of our first real journey – and it occurred to me that Dervla is exactly one year and four days younger than my Mother. Losing my Mother when I was 37 was the catalyst for me to become a traveller and writer.

But there the similarities end, for I have never had an adventure like Full Tilt, and we circled back to my reason for being there. I cannot imagine having that much courage. Didn’t she feel afraid? How did she overcome the fear?

Naaahhhhh,” she says, drawing out the sound for emphasis. “It doesn’t take courage. It takes curiosity.”

Her answer surprised me, to say the least. I never looked at it that way. But what about advice for women travelling solo?

“I would say that, within reason, there is no reason to be afraid. If you take reasonable precautions, I don’t see why any woman shouldn’t travel wherever she likes, alone. What’s the problem?

“If you feel confident, and you trust people, that forms your attitude – and people realize they’re being trusted, and they respond to that by treating you well.”

Curiosity and trust. I thought about these words, her mantra for travel, as I waved goodbye and continued on my drive towards Cork, and the home of my Irish ancestors. I was in Ireland for the first time, to “walk the ground” of my ancestors, as my genealogist put it.

As I drove out of town, I realized the Blackwater River that ran through Lismore also ran through my ancestral village, Castletownroche in Cork. I couldn’t help but marvel at all the coincidences that brought me here, and all the similarities between Dervla and myself.

And I felt a sense of deep calm, a profound inner peace, that all the stars do indeed align sometimes and give us exactly what we need. For me, travelling to meet Dervla Murphy in Lismore was like a pilgrimage, a journey to a holy mountain to seek the wisdom of a guru. For I’ve thought of her words many times sense, and let them guide me, too, as I travel. 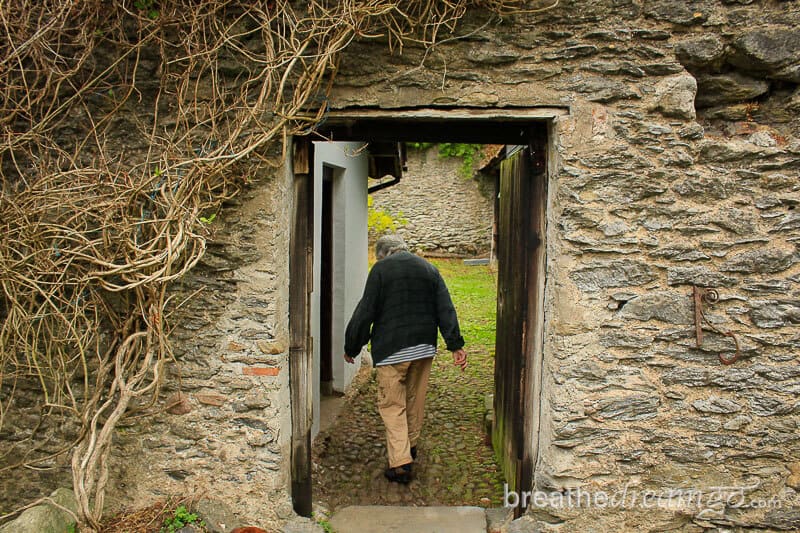 Dervla Murphy at her home in Lismore, Ireland

« Best carry on luggage & packing tips
The Holi Festival: How to celebrate Holi in India »