IF YOU ARE A FIRST time visitor to Canada, you may be wondering how to explore such a vast country. And asking, where should you go to get a glimpse of all that Canada has to offer? This Canada Itinerary post covers 2 weeks in Canada, with 2 ideal itineraries for first time visitors.

It’s a vast country, but I am suggesting two itineraries that visitors to Canada who land in either Toronto or Vancouver could take — each could take about 2 weeks. Maple Key itinerary starts in Toronto and the Rockies Road starts in Vancouver. The Maple Key route includes Niagara Falls and the CN Tower. And the Rockies Road route includes Vancouver and The Rockies. Here’s what you need to know to start planning a trip to Canada to see the best that Canada has to offer.

Where I live, in Toronto, it can be as hot and humid as Bombay in the summer; and the winter can be the other extreme, with virtually Himalayan-temperature winds sweeping across the province. There are not that many cities that range from -30 C. to +40 C., as Toronto does. But over on the other side of the country, in Vancouver, winter is damp and cool, and it rarely snows.

Summer is a great time to visit Canada, as it is warm and you can get out into the wilderness and enjoy hiking, boating, camping and other outdoor pursuits. In Autumn, the colours of the changing leaves are glorious. In winter you can experience snow — as long as you are okay with the cold and are warmly dressed.

Tourists beware: Canada is a vast country to explore

The vastness of Canada cannot be overstated; it is the world’s second largest nation. Vancouver is further away from Toronto (4,300 kilometres) than London, England (3,500 kilometres).

So, two things you need to keep in mind when you plan a trip to Canada are the distances and the seasons.

Canada also has two distinct cultures and two official languages (English and French) and the cities — especially Toronto — are extremely multicultural. Both Toronto and Vancouver are home to very sizeable Indo-Canadian populations: in Toronto, Punjabi is the fourth most common language spoken. English is spoken across the country, and predominates in every province except Quebec, which is largely French speaking. But you don’t need to speak French to get by in Quebec. Montreal, especially, has a large English-speaking population.

Indians (and other nationals) can apply for tourist, business or family Visas; check out this site: Find out if you need a Visa for Canada. And read this post: Everything you need to know to visit Canada.

If you land in Toronto, the Maple Key route takes in Canada’s biggest city — Toronto — and the country’s number 1 tourist attraction, Niagara Falls, which has lots of things to do. But that’s not all. The route can take you into Canada’s famous wilderness, for hiking and/or camping adventures in Algonquin Park; along Lake Ontario to the quaint historic town of Kingston; north to the nation’s capital city, Ottawa; and east to “La Belle Province,” Quebec, for cities that have a distinct European flavour. Quebec’s largest city, Montreal, and the most historic, Quebec City, are on this route, so you can make it an entirely urban adventure if you’re not ready for the rugged outdoors. A significant percentage of Canada’s total population lives along this corridor, so you will never feel far from civilization! And the Via Rail train can take you along most of this route (except for up to Algonquin Park). 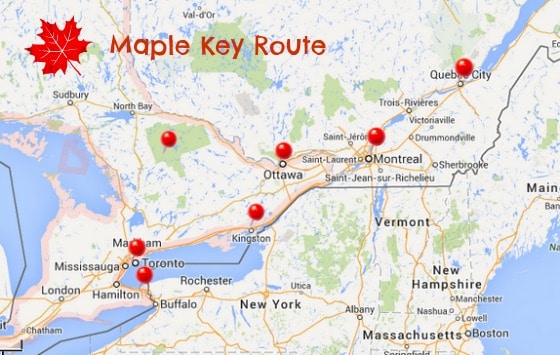 You can completely customize an itinerary based on this route, depending on the season and your interests. My suggestion is to spend at least three days in Toronto, and take a one-day side trip to Niagara Falls. You can drive there and back, or take a bus tour, in one day, easily. Toronto is my hometown and Canada’s largest city, the economic engine of the country, and an exciting, vibrant city. There is no end of things to see and do, but my top suggestions for Toronto are:

If it’s summer, you may want to head north up to Algonquin Park from Toronto and stay in a cabin, lodge or even go camping. Outfitters have everything you need to rent when you get up there. Or, you can drive along the north shore of Lake Ontario towards Ottawa and Montreal, and stop in Kingston. Historic Kingston is the gateway to the 1,000 Islands, a picturesque tourist destination with lots of boating and lodging options.

After Kingston, you can head to the nation’s capital Ottawa, or choose to go directly into the province of Quebec. Ottawa is a small city with tons of options for cultural visits to museums, the House of Parliament and art galleries. You can also get out into the beautiful countryside surrounding Ottawa, such as the Gatineau Hills, very easily.

In Quebec, make sure you spend some time in Montreal. It is a fun, culturally rich city with great shopping, dining and festivals — here’s a great 3-day Montreal itinerary. Quebec City is very old, with an historic quarter that will make you feel you are in Europe.

If you land in Vancouver, the Rockies Road itinerary takes you through the country’s most spectacular scenery, from the Pacific ocean to the jagged, spectacular Rocky Mountains. This itinerary can include taking the ferry over to Victoria on Vancouver Island or taking a drive up into the mountains outside of Vancouver to see Whistler, one of Canada’s most famous, and charming, ski resorts. From Vancouver, you can drive or take the Via Rail train right across the mountains and into the Rockies to Calgary. Stops at Banff and Lake Louise are a must! Lake Louise is probably the most photographed lake in Canada — and it really is as spectacular in real life as it is in the photos. You actually feel you are in a picture postcard. And don’t miss the spectacular Banff and Jasper Hotels.

Vancouver is set between mountains and sea, so it offers vistas and recreation options like no other city in Canada. My favourite Vancouver activity is walking the seawall in Stanley Park. Though an urban park, you can really feel at one with the wild elements of ocean and forest. From Vancouver, you can drive just about an hour or two south to get to Tsawwassen where the ferry terminal is. I love taking the ferry through the Gulf Islands and over to Vancouver Island. You can stop at any of them, or keep going and drive to Victoria, a quiet city on the ocean known for a temperate climate and lush gardens.

Going the other direction from Vancouver, I personally thinking taking the train through the Rockies is probably one of the most romantic and exciting things you can do in Canada! The train runs from Vancouver to Jasper, Alberta; from there you can drive to Lake Louise and Banff. Treat yourself and stay at the Fairmont Chateau Lake Louise, one of the grand old hotels built by the railway about 100 years ago (see top photo). Lake Louise is arguably THE most picturesque spot in Canada — and you will have a never-ending view of it from the hotel. Check out this site to find out much more about road trips in Alberta, and all things Alberta.

Banff is a small town in the mountains surrounded by a national park. It is gorgeous all year round and offers a very wide range of recreation opportunities from hiking, horseback riding and skiing to soaking in hot springs, dining and shopping. A sojourn in Banff is an immersion in the Canadian experience. Finally, you can end your itinerary in Calgary, home of the famous Calgary Stampede, and annual summer festival that celebrates cowboy culture. Calgary has an international airport that can connect you to your onward flight. 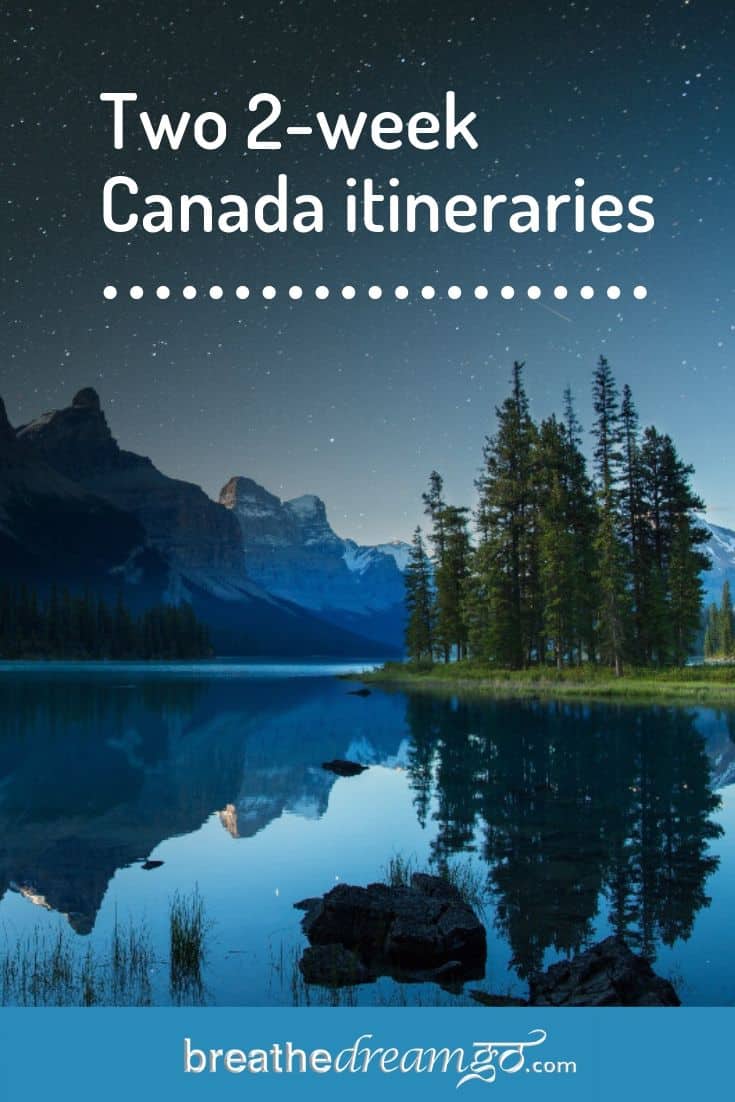 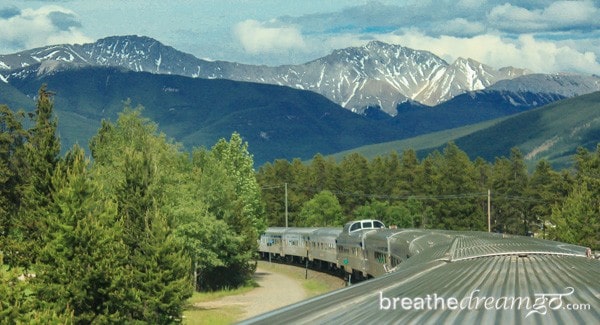 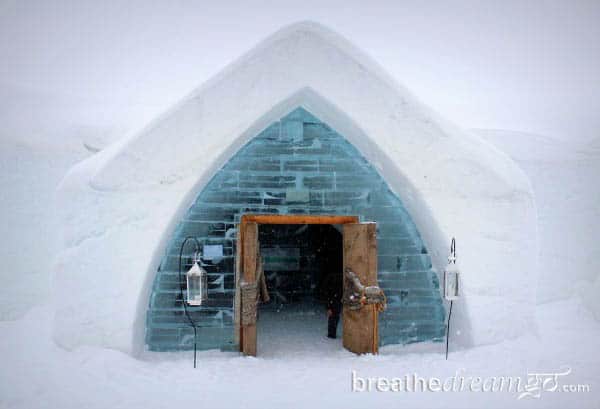 This website uses cookies to improve your experience while you navigate through the website. Out of these, the cookies that are categorized as necessary are stored on your browser as they are essential for the working of basic functionalities of the website. We also use third-party cookies that help us analyze and understand how you use this website. These cookies will be stored in your browser only with your consent. You also have the option to opt-out of these cookies. But opting out of some of these cookies may affect your browsing experience.
Necessary Always Enabled
Necessary cookies are absolutely essential for the website to function properly. This category only includes cookies that ensures basic functionalities and security features of the website. These cookies do not store any personal information.
Non-necessary
Any cookies that may not be particularly necessary for the website to function and is used specifically to collect user personal data via analytics, ads, other embedded contents are termed as non-necessary cookies. It is mandatory to procure user consent prior to running these cookies on your website.
SAVE & ACCEPT
1371 shares
1371 shares