Trek the Himalayas in Ladakh, Sikkim, and Bhutan and do a deep dive into Buddhist culture

THE FIRST THING I NOTICED after landing in Leh, Ladakh to trek the Himalayas, was the clarity of the atmosphere. At an altitude 3,500 metres, the air is thin and I had trouble drawing a deep breath. But the bright blue sky, fresh air, and crystal-like clearness more than made up for it. The second thing I noticed was the influence of Tibetan Buddhism on the culture of Ladakh: Buddhist Temples, prayer flags, chortens, and stupas are everywhere to be seen, and an annual Buddhist Festival, the Hemis Festival, is renowned. Tibetan Buddhism has had a strong influence on the culture of Ladakh since the 13th century when the Mughal invaders began making inroads and the local people chose to align with Tibet. In fact, the region is sometimes referred to as “Little Tibet.”

Ladakh is at the very top of India, part of the state of Jammu and Kashmir, and bordered by Pakistan to the west and China to the east. The Himalayan mountain range runs through Ladakh, creating a high altitude desert, as the rains cannot get past the mountains. It’s a stark and barren place, and very beautiful, a favourite for Himalayan trekking in summer, when it’s warm and the passes are clear of snow. I was there in September, at the end of the tourist season, and the weather was ideal – warm, clear, and sunny.

Leh, the capital, is surrounded by snow-capped mountains that etch rugged lines against the clear blue sky. The stark beauty of medieval Tibetan architecture built into rocky outcrops begins right in the centre of town, with the 16th century Leh Palace. Modelled after Lhasa’s Potala Palace, though much smaller, it’s built of stone, wood, mud, and sand and features the wooden balconies that are characteristic of this style. Though in a dilapidated state, it’s worth a visit for the views from the top, the collection of old Tibetan thangka paintings, and for its mystical charm.

On my first outing from Leh, we drove across a prayer-flag draped bridge over the Indus River, along a flat plateau dotted with crumbling white stupas and burly yaks, to reach the Thiksey Monastery. There are many Buddhist monasteries in Ladakh, and within driving distance of Leh, but Thiksey is one of the most impressive. Built in white blocks up the side of a hill, adorned with stupas, burnt orange colours, and carved wood motifs, it’s a thrilling site. The evocative scene made me feel as if I was truly in Tibet, the roof of the world, a land that once seemed as mysterious and remote as Shangri-la itself when I was younger and less travelled.

Visitors are allowed to tour the public areas of the monastery – called a gompa, a Buddhist spiritual community. We saw young monks (in the familiar maroon robes we know from the Dalai Lama, the religious head of Tibetan Buddhism) buying candy in a makeshift “corner store” and generally behaving like boys, while others, a little older, were on the roof, practicing the long Tibetan horn that makes a booming sound that echoes across the Himalayas and stirs the soul. Inside the main prayer hall, we sat at the back while monks chanted in the semi-darkness to the intermittent sound of cymbals, drums, and conch shells. Every inch of the room was rich in colourful decoration, painted murals, silk hangings, thangka paintings, prayers flags, and in the pride of place, a photo of the Dalai Lama in a gold frame. I felt completely transported by the atmosphere and will never forget this favourite travel memory.

You can get a taste of Ladakh in this video from World Expeditions. Their Hidden Valleys of Ladakh trekking itinerary includes the Hemis Festival and visits to many spectacular Buddhist temples and monasteries.

On another trip, I travelled to India’s remote Northeast to visit Sikkim and trek the Himalayas. Though far from Ladakh – more than 1,000 kilometres – Sikkim is also riven by the Himalayas, one of the longest mountain ranges in the world at 2,500 kilometres, and certainly the highest. Himalayan trekking is popular in Sikkim and there are many Buddhist temples to be seen.

I started my trip in Darjeeling where I was very lucky to see the world’s third highest mountain lit up by the sunrise from Tiger Hill on the morning of my birthday. Mighty Kanchendzonga has five peaks, all snow-covered, and turns many shades of gold, rose, and mauve as the sun rise splashes against it. Watching this spectacular site inspired a feeling of awe in me, and an obsession with Kanchendzonga. I changed my plans and travelled to Pelling, instead of heading towards Gangtok, the capital of Sikkim, so I could see Kanchendzonga mountain up close.

The three days I spent trekking in the Pelling were largely mist shrouded and I never saw the mighty mountain again – though the base was only about 40 kilometres away. However, I did enjoy the lush scenery, friendly people, and touring the ancient capital at Rabdentse, where you can see the ruins of the former palace of the Chogyals (kings) of Sikkim.

Sikkim has about 200 monasteries and the influence of Buddhism is prevalent throughout the state. Images and symbols of Buddhism, such as prayer flags and stupas, are common, though it’s said that while Sikkim and Buddhism are almost synonymous, the majority of the population profess to be Hindu. Not so in neighbouring Bhutan, the world’s only Buddhist country.

Trek the Himalayas: Buddhism is the state religion of Bhutan

Vajrayana Buddhism — translated  as the Thunderbolt Vehicle — is the state religion of Bhutan and it’s deeply embedded in the culture of the country and supported by the government. The majority of the population of Bhutan practice a form of Buddhism that has its roots in Tibetan Buddhism, but differs in various ways including the rituals. All over Bhutan, monasteries and convents are a common sight, and so are monks and nuns – who both shave their heads and wear maroon robes.

Bhutan is a fascinating country because of its remoteness, stringent tourism policies, and adherence to preserving its culture. There are many laws in place to protect the culture, evidenced by the traditional architecture of the buildings and the traditional dress that people wear at work – the kira (skirt and jacket) for women and gho (knee-length robe) for men. It’s an ideal place to trek the Himalayas.

While trekking in Bhutan I saw many monasteries but of course none compares to Taktshang Monastery – otherwise known as Tiger’s Nest. It’s a steep 1,200 metre climb from Paro Valley to this perilously perched monastery, but well worth it. Tiger’s Nest was built in the 17th century to commemorate an event that is both historical and mythical in nature. The people of Bhutan believe that Guru Rinpoche, the founder of Buddhism in Bhutan, flew to this cave on the back of a tigress in the 8th century.

Tiger’s Nest is basically the Taj Mahal of Bhutan, the country’s number one tourist attraction. I was determined to visit, though I was suffering from altitude sickness the day of the hike. My guide up to the monastery told me that the philosophy of Buddhism, and the philosophy behind Bhutan’s famous policy of Gross Domestic Happiness is the same: Happiness is a place between too much and too little. It is the middle way. So, I stopped at the mid-point of the hike, a café with a perfect view of Tiger’s Nest, and felt that I had indeed reached the middle way. And I was content.

World Expeditions Sikkim Bhutan Trek covers many of the highlights of these two fascinating destinations.

NOTE: This post was brought to you by World Expeditions. As, always, my thoughts, opinions, and experiences are my own. 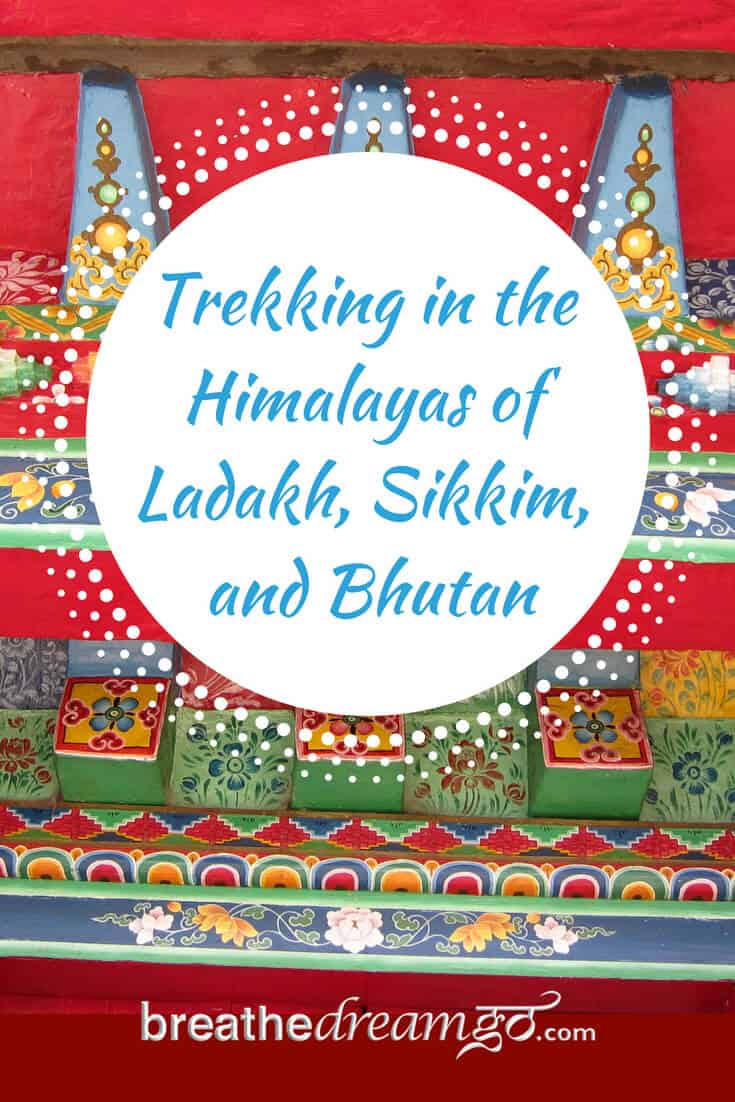 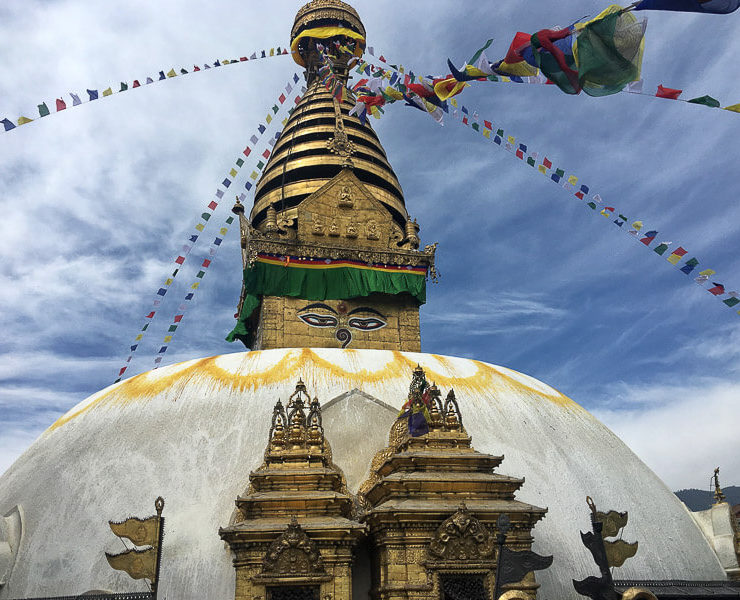 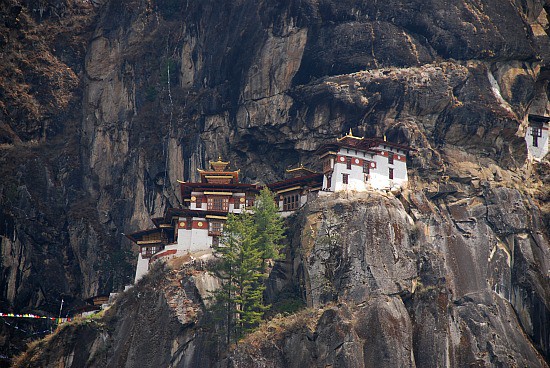 This website uses cookies to improve your experience while you navigate through the website. Out of these, the cookies that are categorized as necessary are stored on your browser as they are essential for the working of basic functionalities of the website. We also use third-party cookies that help us analyze and understand how you use this website. These cookies will be stored in your browser only with your consent. You also have the option to opt-out of these cookies. But opting out of some of these cookies may affect your browsing experience.
Necessary Always Enabled
Necessary cookies are absolutely essential for the website to function properly. This category only includes cookies that ensures basic functionalities and security features of the website. These cookies do not store any personal information.
Non-necessary
Any cookies that may not be particularly necessary for the website to function and is used specifically to collect user personal data via analytics, ads, other embedded contents are termed as non-necessary cookies. It is mandatory to procure user consent prior to running these cookies on your website.
SAVE & ACCEPT
558 shares
558 shares