Chance discoveries in the land of Serendip

SERENDIP WAS THE name of ancient Sri Lanka — before Sri Lanka, and before Ceylon. And yes, it is the root of serendipity, one of my favourite words. Here’s the full story from an edited Britannica entry:

Serendip, name for the island of Sri Lanka (Ceylon). Arabic in origin, the name was recorded in use as early as 361 AD and for a time gained considerable currency. It is best known to speakers of English through the word “serendipity,” which was invented in the 18th century by Horace Walpole. Walpole was inspired by a Persian fairy tale, “The Three Princes of Serendip,” whose heroes often made discoveries by chance. Arab traders originally borrowed the name Serendip from Indian traders — it is in fact a corruption of the Sanskrit compound Siṃhaladvīpa (“Dwelling-Place-of-Lions Island”).

Over nine years of travelling extensively in India, I had wanted to visit Sri Lanka. But the opportunity never seemed to arise until I was invited to the Travel Bloggers Conference Asia (TBCAsia), the first professional travel bloggers conference in Asia, held in Sri Lanka in November 2014. As I was already in India, I had only to fly from Delhi to attend. I call this serendipity.

So here are some of my “discoveries made by chance” while I was in Serendip, er, I mean Sri Lanka!

For more reading: the best foods of Sri Lanka you must try.

With some of the other travel bloggers at TBCAsia, I cycled through the ancient city of Polonnurawa. Polonnurawa was the royal city of the Polonnaru Kingdom, largely built in the 12th century and abandoned about a century later. The site was declared a UNESCO World Heritage site in 1982 and is one of the leading historical attractions in Sri Lanka.

Throughout the extensive site, I was astounded by the beauty of the Buddhist carvings. In one dark temple, I felt like I was entering a portal to antiquity. Several large Buddhist statues seemed to shimmer and glow in the dim light, and I was told they were each made of a different stone — so that each glistened differently. The effect was uncanny, and when I walked outside into the bright sunshine and saw the clear blue sky, I felt like I had returned from somewhere. 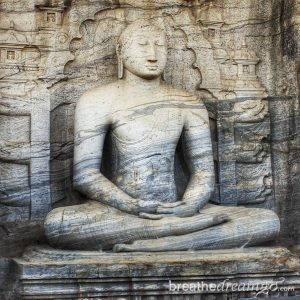 But the best experience of Polonnurawa was yet to come. Near the end of the site, we parked our bikes and walked to into a parkland setting to see three massive, beautiful and serene Buddha statues on display. I read that just seeing them evokes loving kindness in the viewer, the mute statues doing the work of sage teachers and meditation practise.

Perhaps it was their influence that made me connect with a large family of Sri Lankans who were seated on a big rock, facing the sublime statues. I smiled at them, they smiled at me, and the next thing you know, I was seated among them, linking arms and getting our photos taken together. We laughed together and enjoyed the lovely spot, lit by the slanting rays of a warm afternoon sun.

These are the moments that make being a tourist worthwhile — when you reach across language and cultural barriers to just BE together in a common humanity. We were all devotees there together.

You can see the ancient Sigiriya rock citadel from a distance, in every direction, as it pokes up above the lush tropical forests and gently rolling hills of central Sri Lanka. Sigiriya means Lion’s Rock, and the whole thing is one big rock, outfitted with huge lion’s paws (the head is long gone) sitting on a massively big rock.

We arrived early to climb the 1,000 steps to the top and I was worried I wouldn’t make it. I knew it would be a hot and sweaty climb, there would be narrow stairs and one worrying place where bees sometimes swarm without warning. Then I saw elderly women, middle aged monks, tourists from Japan wearing completely inappropriate shoes: if they could do it, so could I.

And of course I did make it to the top, though it was not the top that was tops for me — it was the beautiful and delicate “damsels” frescoes. These lovely ladies, more than 1,500 years old, adorn a wall about halfway up. And while there are only a fraction left of the original number (about 21 of 500), they make up for it with their grace and beauty. It’s delightful to see the topless women, adorned with ropes of jewels, cavorting on the rock face. And delightful to see the chaste monks snapping photos right along with the rest of us.

Along with beauty and grace, these frescoes have an air of mystery as there is contention around who they are: some say they were courtesans of King Kassapa (who built Sigirya as a palace fortress in the 5th century), others claim they are representations of the goddess Tara and still others say they are celestial nymphs.

Sigiriya is considered to be one of Sri Lanka’s leading historical sites, and was declared a UNESCO World Heritage site in 1982. According to the UNESCO site, “The Maidens of the Clouds are comparable to the most beautiful creations of Ajanta.”

To find out more, read this detailed post about climbing Sigiriya.

On the first day of the TBCAsia Sri Lankan tour, I dutifully climbed into a jeep along with about five other travel bloggers, and set off in a convoy of jeeps for Kaudulla National Park in central Sri Lanka. I had no idea what to expect as we rode along a dirt track into a bright green field surrounding a pale blue lake.

Suddenly, I saw them in the distance, dark smudges on the landscape, moving rhythmically together, and I was mesmerized. I scanned the horizon and did a quick count, realizing that we were heading right into a herd of 200 or more Asian elephants.

I’ve never had an experience like this before and I was exhilarated to see so many unchained and free elephants. Usually in Asia you see elephants in chains, ridden by mahouts, and used for work and tourism. But these wild elephants were wandering freely in small groups. After my initial excitement died down and I got to work, trying to take photos of them from a moving jeep while all the other travel bloggers were also jostling their cameras, I witnessed a bull elephant charge a jeep, let out a bellowing howl, and stop just in the knick of time.

We soon realized the jeep was between the bull and a small family group. In other words, we were in the way. My colleague Michael Turtle wrote a comprehensive post about this experience and the status of elephants in Sri Lanka Sri Lanka’s elephant gathering — which also has stunning photos.

Though I loved seeing the elephants wandering free and wild, I felt conflicted about being part of a dozen or more jeeps trespassing on their territory. Seeing such a magnificent sight does indeed inspire wonder and motivate the visitor to care about their welfare, but at what cost? What do you think? Is this sustainable and responsible tourism? Or can we be doing something better to protect wild animals in their natural habitat?

Sri Lanka is actually a very good destination for wildlife tourism. Aside from some excellent national parks, like Yala, you can also go whale watching in Sri Lanka and on a Sri Lanka wildlife safari.

I was very impressed by this entire experience and by my travels in Sri Lanka. It was a great first trip, and I hope the first of many. Sri Lanka would be a great introduction to South Asia as it is more relaxed, tropical, quieter and cleaner than India, more accessible than Bhutan, and has more tourism infrastructure than Nepal.

Cinnamon Lakeside Colombo: A stunning hotel, right in the heart of the city, with a great location on the river. The pool and riverboat dining are the stars of this one.

Chaaya Village Habarana: With a more laid-back feeling, this hotel has (another) great pool and ideal access to Sigiriya and Kadulla National Park. The more upscale Cinnamon Lodge Habarana is literally right next door.

Cinnamon Bey Beruwala: A great location on a beach promontory, this large and stylish hotel features a massive infinity pool and lots of dining options. A coral reef for snorkelling is a bonus. Great hotel for those who like to socialize.

Chaaya Tranz Hikkaduwa: This was my favourite. The location is brilliant, I loved the ocean front dining, and the beach here is pristine, beautiful and seems to be exclusive. This one is more for those who like to chill out, swim and surf. Highly recommended. 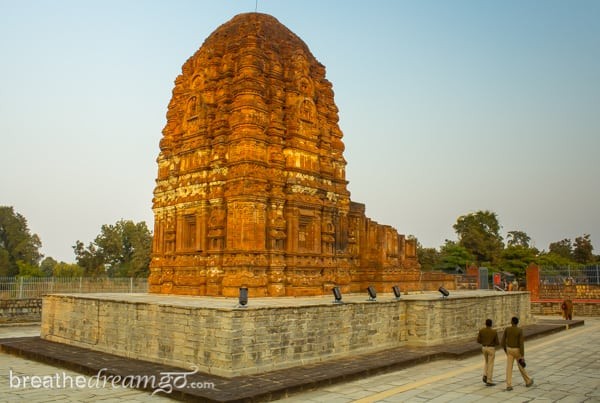 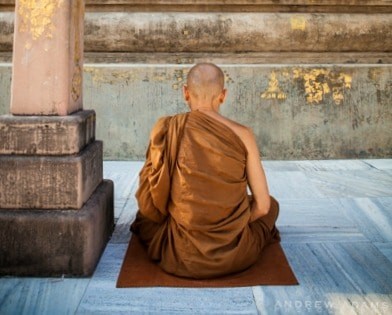 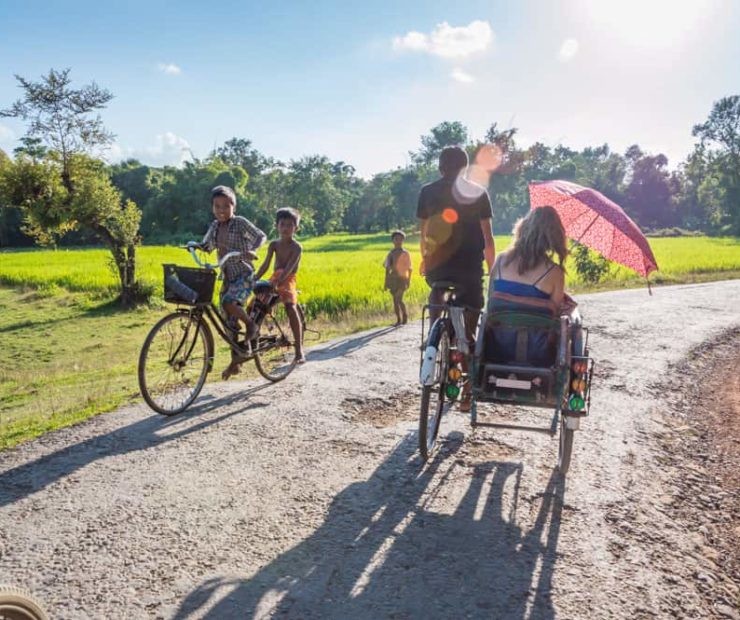 This website uses cookies to improve your experience while you navigate through the website. Out of these, the cookies that are categorized as necessary are stored on your browser as they are essential for the working of basic functionalities of the website. We also use third-party cookies that help us analyze and understand how you use this website. These cookies will be stored in your browser only with your consent. You also have the option to opt-out of these cookies. But opting out of some of these cookies may affect your browsing experience.
Necessary Always Enabled
Necessary cookies are absolutely essential for the website to function properly. This category only includes cookies that ensures basic functionalities and security features of the website. These cookies do not store any personal information.
Non-necessary
Any cookies that may not be particularly necessary for the website to function and is used specifically to collect user personal data via analytics, ads, other embedded contents are termed as non-necessary cookies. It is mandatory to procure user consent prior to running these cookies on your website.
SAVE & ACCEPT
100 shares
100 shares