Indian writing is vibrant at home and abroad

In honour of the Jaipur Literature Festival, which kicks off on January 24 in Jaipur, India, I am publishing an article I wrote for the Maple Tree Literary supplement about my afternoon with four delightful Indo-Canadian writers.

Jasmine D’Costa sat solidly in her chair, looked at me with clear, wide-open eyes and talked with a sense of authority in her voice about her past as a banker in Mumbai and her present as a writer and editor in Toronto. Across from her, Mayank Bhatt talked about establishing himself as a writer in Canada, with an amiable mix of gentleness and conviction. Author Farzana Doctor listened more than she talked, but when she added something to the conversation, it was carefully considered and spoken in articulate tones, tinged with the formality of academia. Writer and book reviewer Niranjana Iyer, soft-spoken and well-bred, looked like an Indian Audrey Hepburn, and she drew me in with her huge, expressive eyes and the obvious intelligence in her voice. Each of these people is just that, people – unique in their background, outlook and experience. 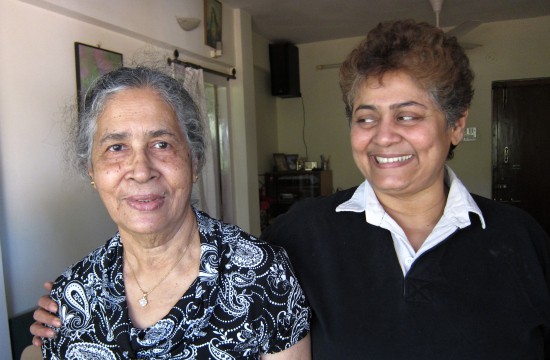 Jasmine D’Costa and her mother in Mumbai, 2010

Jasmine D’Costa is a Catholic from south India who had a successful career in banking before immigrating to Toronto, Canada to begin her career as a writer of short stories (Curry is Thicker than Water) and editor of anthologies (Canadian Voices and Indian Voices). Mayank Bhatt, who is a Gujurati Hindu, is the most recent arrival to North America – he was a journalist in Mumbai and then worked in a trade office; he now has a full-time job as the Executive Director of the Indo-Canada Chamber of Commerce, publishes a blog called Generally About Books and is also working on a novel.

Farzana Doctor was born to Muslim parents of Indian origin in Africa and grew up in Canada; she is gay, she is a psychotherapist and she is the author of two novels (Stealing Nasreen and Six Metres of Pavement). Niranjana Iyer, who told me to call her Nina, is Tamil, but she doesn’t speak the language. She grew up largely in Delhi, attended the prestigious Indian Institute of Management (IIM) in Ahmedabad and later moved to the U.S.A. to study creative writing at university. She now lives in Canada with her neuroscientist husband and three-year-old son and considers herself a global citizen. She writes for many magazines and publishes a book review blog called Brown Paper. 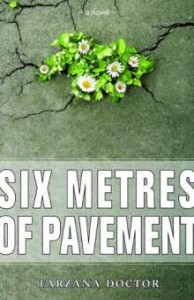 I gathered these writers together to find out about Indo-Canadian writing – and found out the closer you look, the more difficult it is to define. Like India itself, Indo-Canadian writers in Canada are extremely diverse and there is no set pattern of experience; no underlying theme they are collective exploring; no real commonality between them. Except that they are Indian. And after about two hours of discussing their differences, after several glasses of wine and after a feeling of camaraderie developed, the truth came out. They may have different experiences, backgrounds and viewpoints, but they tend to stick together, support each other and help each other out.

And this perhaps is the essence of their Indianness, this tolerance and helpfulness. In spite of a long history of communal violence back home – and also a long history of tolerant pluralism – Christian, Muslim and Hindu sat together in Toronto and talked with trust and freedom, pledging to help promote each other’s books and other writing efforts.

And here’s another thing, articulated simply, clearly and authoritatively by Jasmine: Their voices are Canadian, and an important part of the mosaic of Canadian multiculturalism. This is Canada, too, a tolerant nation made up of diverse peoples – not unlike India itself – though perhaps more so in Toronto, one of the world’s great multicultural cities. All of the ethnicities in Canada can lay claim to this inclusion, but perhaps Indians have a greater share due to their English language skills, their literary tradition, their large numbers (soon to be the largest “ethnic” group in Canada) and the rapid growth of both India’s economy and its profile on the global stage.

These writers have all found an identity in Canada as writers, and whether they are seen as Indian, Canadian or global depends on the prism you look through. The politics of identity became a central theme of the conversation, and how tricky it is to be an “ethnic” writer in Canada; how white, European culture is still considered the mainstream; and about how granting bodies and other organizations supported by the government are bound by CanCon (Canadian content) rules – in an effort to keep the American cultural tsunami at bay.

But being Indian may make it easier than not – Indian writers certainly are prominent in Canada, and especially in Toronto, home to Michael Ondaatje, M.G. Vassanji and Rohinton Mistry. Jasmine and Farzana passed around their books to show the very Indian-looking treatment the covers were given – women in saris, fonts designed to look like devanagari script. Their publishers told them the books would sell better if they looked Indian. For better or worse, the appeal of the exotic is still a draw, and so is the modern, Indian literary tradition.

Mayank exclaimed that they should all be thankful to Manmohan Singh and Salman Rushdie – for Singh reformed the Indian economy and laid the groundwork for the current boom and Rushdie’s success with Midnight’s Children – a book written in English – changed the way the world looked at Indian creativity.

And though it is not politically correct, perhaps they owe a debt of gratitude to Britain too – for along with plundering the country and denigrating it’s native-born citizens, the British Raj left behind a legacy of educational institutions, political and administrative bureaucracy, the train system and English. If you are among the educated elite of India, who are taught English at school, you stand a much better chance of blending in with the globopolis – the predominantly English-speaking, urban-based, global citizens of the world. English may be one of the reasons for the success of Indians – if not of India. And this was a topic of conversation too – that though they all had different mother tongues back in India, they can all speak with each other, and with me, in English.

But even though they speak English, it does not necessarily mean they have lost their cultural identity. These writers seemed very agile at skating along the surface of all of these contradictions, political considerations and attempts at labeling them; and they seemed energized by the excitement of being Indian in the 21st century. It has been said before that Britain dominated the 19th century, and America the 20th, but the 21st belongs to India. Each of these writers have their own struggles – as all writers these days do, of course – but I felt the excitement and energy of being part of a rising tide. There was a confidence in the room, the confidence born of knowing you have something to say and that you have a good chance of being heard.

« My story: Why I write about travel in India
I supported a documentary about Indian magicians in Delhi and got a magic ring! »