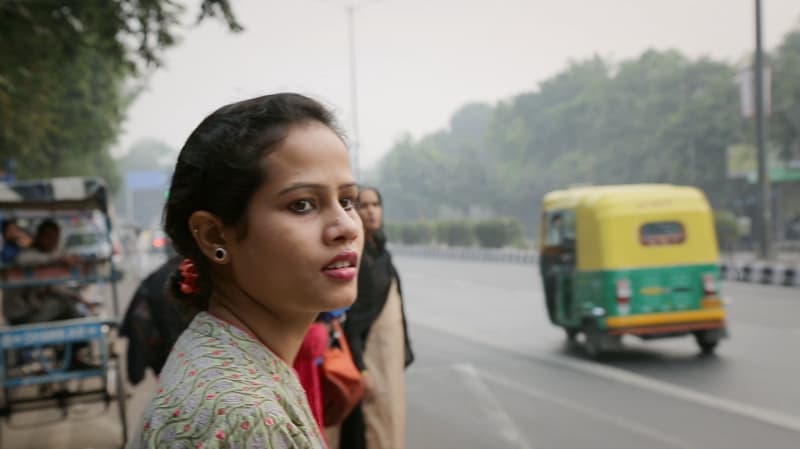 This film is not about an inconvenient truth, it’s about a harrowing truth. Inspired by the Delhi Gang Rape of December 16, 2012, director Deepa Mehta veers wildly from the sensational and the conventional to present a raw film that uncovers universal truths. This horrific incident made worldwide news and provoked unprecedented outrage in India — forcing the country to examine attitudes towards women and change the laws. It stirred up issues and concerns around women’s safety in India and planted fear among many travellers and would-be travellers to India. I have written about these issues extensively on this blog and elsewhere. I saw Anatomy of Violence at a Press and Industry screening at the Toronto International Film Festival. For more background on the film and an interview with Deepa Mehta read The Globe and Mail article.

Unflinching. The word unflinching was created for Anatomy of Violence. It’s a shockingly unflinching deep dive into the everyday world of the poorer class in Delhi. The men portrayed in the film, based on the men who perpetrated one of the most horrific acts in modern memory, live among the middle and upper classes in India’s capital like weeds in a garden.

They grow up twisted from lack of education, nutrition, opportunity and community. Most of them are poor migrants who leave their villages for a so-called better life in the city. They cram into tiny homes, families of three, four and more in a room the size of a walk-in closet. And they scramble to make a few rupees here, a few there, making very little distinction between what’s ethical and legal and what isn’t. They don’t have the luxury of these finer distinctions.

Deepa Mehta makes us look inequity straight in the face. And it’s not pretty. All of those people who have told me, over the years, they would never go to India because they don’t want to face the poverty: this movie’s for you. But it’s not what you think. We’re not talking about pitiful, writhing, saintly, martyrs struggling to keep their families together. We’re talking about unlikable characters, driven by craven egos, and almost no moral compasses. There’s not a jot of romance in this film.

Years ago, I asked a spiritual teacher in India why people journey to India in search of spiritual truth; why is India considered the ultimate destination for “seekers” of truth. He said to me that it’s because India is a land of extremes. The extremes of spiritual light and human degradation exist cheek-by-jowl in India.

Some books and films celebrate the light that you can find in India. This film lifts the rock and exposes the dark. And it’s shocking. It’s shocking for several reasons, and they might not be what you expect.

While wanting to gain whatever insight the film had to offer, I didn’t relish the idea of having to confront the brutal rape itself. And Mehta spares us this nightmare. Instead she offers us, in some ways, an even more horrifying experience. These are the three things I found most shocking about Anatomy of Violence.

This is the clash of the haves and have-nots we cannot control, and cannot fix. This is the face of changing India, the modern world of materialism and media bull-dozing what’s left of a traditional culture.

Mehta could not have made a more eviscerating film. But part of its genius lies in not trying to manipulate the viewer to achieve a socio-political agenda. She just lays it out. “This is what we’re like only.” Which means the viewer has to decide.

Not only does she have the courage to make a very shocking and uncomfortable film, but she also has the insight and integrity to neither manipulate or point fingers.

It would have been so much easier if Mehta let us off the hook. If somehow, Mehta’s film allowed us to keep the illusion that these men were monsters, aberrations, not part of the same society as us, not our responsibility.

And that’s the final and most shocking thing of all about Anatomy of Violence. It’s a deeply humanistic film.  It’s not about “them,” it’s about us.

The other film I reviewed at TIFF is the flip-side of this one. India in a Day is also a deeply humanistic film about India. I loved it, and wrote a glowing review, encouraging everyone to see it as I think it transcends the media stereotypes and negativity by showing us that Indian people are “just like us.” They hope and dream, they grapple with change, they try to find meaning in the modern world. India in a Day is humanistic in a light and life-affirming way. Anatomy of Violence is humanistic in dark and nihilistic way.

The final scene, the aftermath, when one of the convicted rapists — facing the death penalty — speaks is the most chilling of all. His expression of “whatever” is the most nihilistic I have ever seen.

I don’t know whether to congratulate Mehta or not.

MORE READING ABOUT WOMEN’S SAFETY IN INDIA ON BREATHEDREAMGO

This website uses cookies to improve your experience while you navigate through the website. Out of these, the cookies that are categorized as necessary are stored on your browser as they are essential for the working of basic functionalities of the website. We also use third-party cookies that help us analyze and understand how you use this website. These cookies will be stored in your browser only with your consent. You also have the option to opt-out of these cookies. But opting out of some of these cookies may affect your browsing experience.
Necessary Always Enabled
Necessary cookies are absolutely essential for the website to function properly. This category only includes cookies that ensures basic functionalities and security features of the website. These cookies do not store any personal information.
Non-necessary
Any cookies that may not be particularly necessary for the website to function and is used specifically to collect user personal data via analytics, ads, other embedded contents are termed as non-necessary cookies. It is mandatory to procure user consent prior to running these cookies on your website.
SAVE & ACCEPT
71 shares
71 shares