You are here: Home / News/Events / Deepak Chopra and the happiness formula 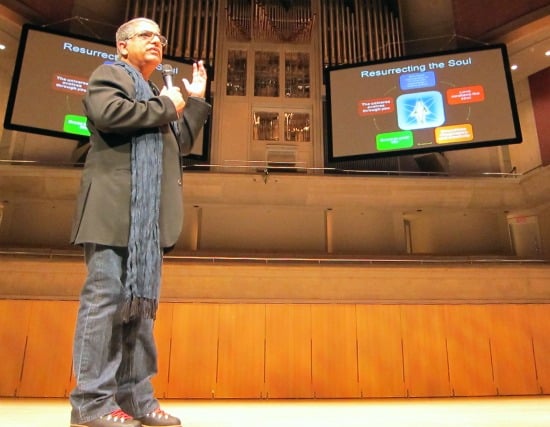 How to find happiness: look within

Thanks to MyBindi, and about 25 Facebook friends, I won front-row tickets to see Deepak Chopra at Roy Thomson Hall in Toronto — and I also won seats from Zoomer Media, which I gave to well-deserving friends. Almost two years ago, I wrote a blog post about why I admire Deepak Chopra, and how I feel we have the same mission, which is Sharing India’s wisdom with the world.

Deepak Chopra walked very simply on an almost-empty stage wearing jeans, thick-soled boots, a black jacket and jeweled glasses. With no fanfare whatsoever, he began speaking directly to the audience in a straightforward and down-to-earth manner. He spoke extemporaneously for about 90 minutes, with ease, intelligence and an absolute grasp of his material.

From the outset, he began building his case for a spiritual understanding of life using largely scientific facts, medical research and quotes from famous scientists, mathematicians and physicists. In other words, he knows his audience – westerners – need a rational and scientific approach to convince them.

In my case, he was preaching to the choir. And though I was relieved and delighted to discover that science is finally catching up to the ancient wisdom of the rishis, yogis and sages of India, I personally don’t need the findings of a medical study or renowned astro-physicist to convince me of the truth of what Dr. Chopra was presenting.

In essence, he said:
– the mind is not in the brain, it is everywhere in the body
– there is a formula for happiness, and we can choose to be happy
– the two best ways to learn to become happy are through cognitive therapy (change your thinking patterns) and meditate
– you can change the structure of your brain, it is called neuroplasticity
– there’s much more to happiness than pure pleasure; to be truly happy you need to be on a spiritual journey – you need to discover your true identity, who you really are: this is the path to enlightenment
– the brain and the body are not structures, they are processes
– we are always in the process of becoming, the body is in the field of impermanence; suffering arises from addiction to permanence in the field of impermanence
– the only aspect of your being that is real is the part of you that is the listener; the part that is pure consciousness
– the universe arises from nothing and at the most fundamental level is a field of pure possibility
– definition of god: everything is created in consciousness
– your own consciousness is the vortex; you need to be a conscious observer to manifest the universe
– science’s biggest mystery – the hard problem – currently is perception (how do we experience the world?)
– best quote of the evening was about the science of perception: “Something unknown is doing we don’t know what”
– the upshot is: we are all part of the same consciousness and we’re all creating the universe – our reality – all the time 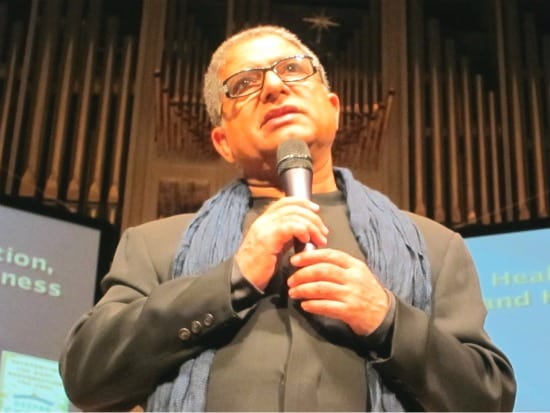 This is why yoga (meditation) and intentionality are so important: yoga says, and has always said, your body is made of light, you can change yourself; and the ultimate truth is that you are one with everything. You change your relationship with time by being present and you can change your biology through meditation.

To give the audience a demonstration, he walked us through a guided meditation. The acoustically engineered hall was as quiet as a tomb while we all spent some minutes quietly meditating. It was a refreshing experience.

Consciousness is a singular, it has no plural

I was very gratified that Dr. Chopra gave the wisdom of India, yoga, the Vedantic tradition and teachers like J. Krishnamurti their due. He ended the talk be deviating away from science, medicine and physics to talk about following a yogic way of life, to present a concept of non-duality, to reiterate that the whole universe is in every object of our perception and that we are all part of a divine consciousness. There is no such thing as death; death is just “the offs between the ons.”

I love that he said, live the questions and life will move you into the answers. And I loved his presentation of yoga: the yoga of feeling is LOVE; the yoga of being is MEDITIATION, the yoga of thinking is CREATIVITY and the yoga of doing is SERVICE.

One of my favourite quotes of the evening was from Krishnamurti: “The highest form of human intelligence is to observe yourself without judging yourself.”

At the end of the talk Dr. Chopra introduced a woman from the Toronto-based office of his foundation, Wellworld.org and he signed books in the lobby. I asked him to sign the newspaper article that he wrote in the Times of India and that I keep on my fridge as inspiration (the article I mention in my blog post, Sharing India’s wisdom with the world).

Power to the people

It was a very satisfying evening. I wish I had taken a picture of the audience – the large, luxurious hall was full and though some may have come to see a celebrity, in the end, it was an evening of spiritual teachings.

Dr. Chopra has been in for his share of criticism, but I have never really understood. It seems he is criticized for making money and attaining celebrity, as if that somehow invalidates his teachings. To me, it is more important what he does with his fame and his money. He seems to use it to create foundations, to teach, to speak, to write books and arrange conferences, like his upcoming Sages and Scientists conference.

Perhaps he should be doing more to make his teachings accessible to people who can’t afford a ticket to Roy Thomson Hall, or can’t afford to buy his books. But that’s really none of my business. In my estimation, the good that Dr. Chopra has done by spreading messages of positivity and empowering spirituality in a language that westerners can understand and grasp far, far outweighs any judgments about his LA lifestyle, famous friends or expensive glasses. If he came onstage in a white robe and flowing beard, he would be labeled a nut and attract only a fringe audience. He has figured out how to teach the same thing that the yogis of India teach, but to a mass audience of educated westerners. More power to him.

« Top 5 myths about India
Year of the tiger »