You are here: Home / India / What spirituality is 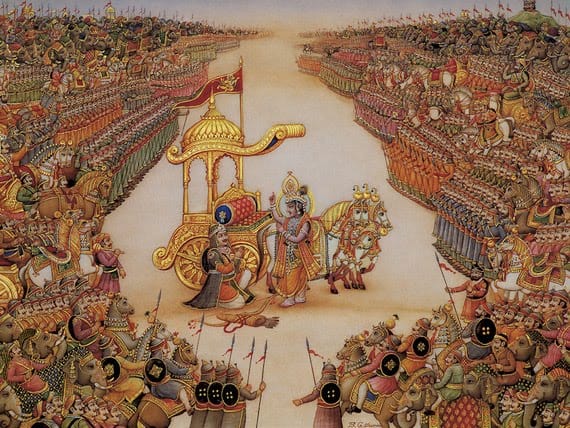 Scene from the Mahabharat: Krishna and Arjun at the battle of Kurukshetra

Yoga philosopher, Kirtan leader, Sanskrit teacher, Sitar artist and the writer / blogger behind Akshara Yoga blog: Ram Vakkalanka is accomplished in many things. He is also my friend, I am proud to say. Ram and I have bonded over our deep love and respect for the wisdom traditions and culture of India. We have many shared ideas and notions about yoga and spiritual philosophy, and feel that the essence of these teachings is largely lost, overlooked or misunderstood in the west (and sometimes even in India).

Some time back, I wrote a blog, What yoga is, after attending a workshop with internationally known yoga teacher Mark Whitwell at the Yoga Festival of Toronto. I was delighted to discover that Mark Whitwell really “gets” yoga; and I feel the same way about Ram. Over dosas at a Toronto South Indian restaurant, we discussed the essence of spirituality and Ram told me the story of Kaushika, which I loved. He said, “In the great epic Mahabharata, there is the story an aspiring yogi called Kaushika who meditates for many years but fails to attains self-awakening.” I feel the story expresses a truth about spirituality that many people don’t seem to understand. Here it is.

There was a young man called Kaushika, who practiced meditation and yogic austerities for a long time in a forest near a city called Mithila in northeastern part of India. One day, while Kaushika was resting under a tree after a long stretch of meditation, a crane landed on top of the branch directly above Kaushika and defecated. The bird’s excretion fell on Kaushika’s head. Kaushika felt uncontrollable wrath at this and looked at the bird severely. As if Kaushika’s angry looks were a deadly arrow, the crane fell down dead. Seeing this, Kaushika thought to himself that be due to his austerities, he attained some kind of extraordinary powers and was proud of himself. 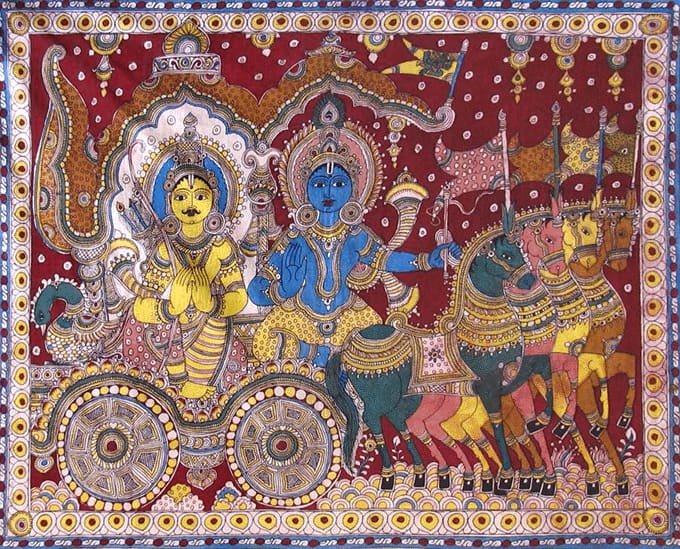 Scene from the Mahabharat: Krishna and Arjun at the battle of Kurukshetra

People practising spiritual austerities in those days were enjoined not to spend time on any worldly activities such as earning money, having possessions and cooking, but devote their time entirely to meditation and other spiritual practices. During this time, it was incumbent upon the householders in the community to support the spiritual seekers with life’s necessities such as food and clothing. This practice served two-fold purpose: the spiritual seeker has to practice control of senses and eating whatever was donated by others rather than entertaining desires for specific, tasty food, helped in that; and, it forced householders to practice charity, communal sharing and promoted a spirit of service. This process of collecting food is called Madhukara.

Poster for the TV version of the Mahabharat

Just as a honey-bee collects honey little by little from many flowers, the spiritual aspirant has to collect his food little by little from different households, without being a burden on any family. The aspirants are allowed only one meal a day and they can ask for food only three times. As per the tradition, Kaushika went into the city to get some food later that day. As luck would have it, Kaushika didn’t get any food from the first two houses he chose that day. Kaushika stood in front of the third and last house for the day, hungry and tired, and asked for food. The lady of the house was busy serving a meal to her family at that time and didn’t respond promptly to Kaushika. Having asked for food three times and not getting any response, Kaushika was about to move on with a little disappointment, when he saw the lady of the house hastily coming out with some food to donate. Starving and impatient, Kaushika looked at her angrily for the inordinate delay in serving him food.

The lady, sensing Kaushika’s anger, looked at him quietly and said, “I was busy serving my family and hence the delay. Besides, I am not a crane to be killed by your angry looks.” Kaushika’s consternation knew no bounds! How did this lady know about the morning’s incident, to which there were only two witnesses: himself and the crane! The lady, as if reading Kaushika’s thoughts said to him, “Yoga is not just about sitting under a tree and meditating. You can attain enlightenment by discharging your responsibilities perfectly and being detached. If you have further doubts, please see the town butcher Dharmavyadha and he will give you all answers.”

Kaushika, quite humbled, silently walked away from there looking for Dharmavyadha, the butcher. As soon as Dharmavyadha saw Kaushika, he smiled, addressed Kaushika by name and remarked about the latter’s encounter with the lady as if he were a direct witness to the incident. This was the second shock for the day to Kaushika. Reduced to dust by the so-called commoners, Kaushika humbly asked Dharmavyadha what kind of yogic practices he practiced to obtain such miraculous spiritual powers. Dharmavyadha said to Kaushika, “I never practiced any spiritual austerities, meditation or yoga like you. All I know is how to do my duty well. I serve my parents and elders, take care of my family, fulfill my obligations to the society and I practice detachment from all this knowing that I am the eternal self and always free.”  Kaushika received Dharmavyadha’s teachings with utmost reverence, realized his folly in talking the life of  an innocent bird and left with a perfect idea of yoga philosophy.

Yoga philosophy from the masters 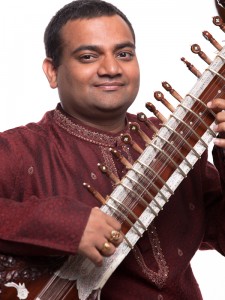 Adi Shankaracharya, one of the most renowned yoga philosophers, said: Svasvakarmanushthanameva Bhagavataha Puja –  fulfilling one’s duties and obligations constitutes highest spiritual austerity and leads to spiritual liberation. Bhagavadgita, one of the most authoritative works on yoga, offers an interesting definition of yoga: Yogaha Karmasu Kaushalam – yoga is perfect fulfillment of one’s duties. In other words, a plumber who does a great job is practicing yoga, an athlete who brings medals to his country is a yogi, a mother who raises a healthy family is a yogi, a leader who leads his community towards progress is a yogi. Yoga is the birthright of everyone; no country, no culture, no color, no race has an exclusive right to it. The housewife, the musician, the mechanic…anyone can (and should) be a yogi.

In fact, one of the most sublime teachings of Bhagavadgita is: Yogasthaha Kuru Karmani –  being established in a state of yoga, fulfill your role in the world. If you are a teacher, strive to be the best teacher you can be; if you are an electrician, be the best electrician you can be, if you are a soldier, be the best soldier you can be. Balance your head and heart, realize that you are not simply a name and a form, but the Divine itself and approach everything and everyone in life from a love-based higher view point. Then you will find imperturbable peace and harmony inside and outside. This is the quintessential teaching of yoga philosophy. In the great epic Mahabharata, the story about Kaushika illustrates this point perfectly.

Not that postures and meditation don’t constitute yoga, but that’s not all there is to yoga. Yoga can be practiced by everyone at every walk of life, any every moment of life, on and off the mat!