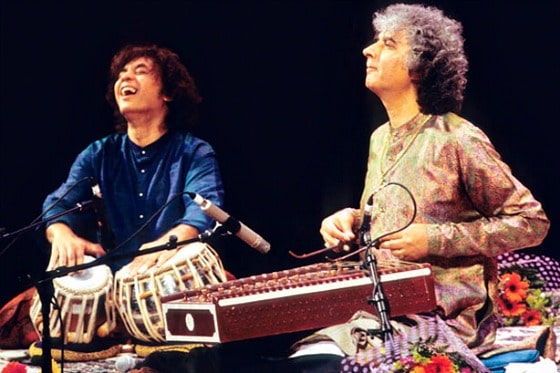 There was a moment during last night’s concert by Ustad Zakir Hussain and Pandit Shivkumar Sharma when the music, the audience, the entire atmosphere of the concert hall came together in a crescendo of movement, joy, vibration; when all barriers blurred and dissolved; and when the spiritual truth of oneness was achieved. And this, I think, was the point. For as great as the music was last night — and this was two legendary masters, at the top of their game, playing to an adoring audience — I found Pandit Shivkumar’s words just as inspiring.

The concert started a bit late, Pandit Shivkumar explained, because they were held up all day in Quebec City due to fog. In fact, it looked as if they wouldn’t make it to Toronto at all. “But we are here because of your love,” he said, with a profound simplicity that made the truth of his words ring clear. Later, before he introduced the last raga, Raga Pahadi, he said there is confusion about who is playing, who is making the music; and it is arrogant if the musicians think it is they. He said that he and Zakir Hussain are mediums, and it is,”by His grace that we play.”

It was an astoundingly humble statement from a great musician, and the spiritual truth of both his words and the music of the maestros came together during the rousing crescendo to Raga Pahadi. Personally, I forgot myself, forgot who I was, where I was, as I watched these greats move together in incredible harmony, playing off each other, creating complex rhythms and synchronized dynamics that almost belie belief. In my entire life, I have never seen anything like the lightning sure movement of Zakir Hussain’s hands as he beat an intoxicating rhythm from the tabla. It was a great night, and I felt lucky to be there. Check out this video I found on YouTube to get a sense of the music and the musicians:

The concert, at the Weston Recital Hall of the Toronto Centre for the Arts, was presented by Small World Music. It was the opening concert for the 11th annual Asian Music Series, which runs from March 28 to June 1. The evening opened with words from the Consul General of India Mrs. Preeti Saran, who is always an inspiring speaker.

The series was very lucky to get started with these two performers. According to the playbill: Pandit Shivkumar Sharma is the world’s greatest player of the santoor — a stringed instrument that is played by striking the strings with a pair of curved hammers. Ustad Zakir Hussain is a classical tabla virtuoso of the highest order, whose intuition and masterful improvisational dexterity have established him as an international phenomenon. He won a grammy award in 1992 and has recorded with artists such as Pandit Ravi Shankar, George Harrison and Van Morrison.

There are a lot more great players lined up, including:

So be sure to check out the program and try and catch one of these uplifting shows. Small World Music Society has presented close to 500 culturally diverse concerts and workshops in Toronto since it started in 1997. They support local artists and have featured performers from Mali to Mongolia and from Brazil to Bulgaria.

What is Raga Music?

To learn more about the Indian classical style of music called raga (pronounced raag), watch this informative video. One of the many things that characterize a raga, and differentiate it from western classical music, is the improvisational nature of the performances. Achieving the colour, or feeling, of the music is more important than following a score. The way rhythms and melodies are structured and composed is also very, very different than western music. For a newbie, it can take some careful listening to appreciate the sophistication, complexity and nuance of this music. But when you let this music in … it is completely intoxicating.

« A year in Japan
Gathering Road Trip:
On the Whelan trail in eastern Ontario »