THERE ARE TWO scenes in the Satyajit Ray film The World of Apu (Apur Sansar, 1959) that sent me into the bathroom crying at the end of the film. One has to do with the birth of Apu’s son, and the other, the last scene of the movie, when they reconcile. More than that I don’t want to tell you if you haven’t scene this classic of world cinema.

When I came out of the stall, tears still wetting my face, I struck up a conversation with a white-haired woman who had a kind and gentle face. I knew immediately she was someone I could cry in front of, and indeed she understood, she had just seen the same film.

Not to have seen the films of Ray would mean existing in a world without the sun or the moon. — Akira Kurosawa

Carol and I were to see each other several times more as we were both attending the same film series at Toronto International Film Festival headquarters, the TIFF Bell Lightbox. The Sun and The Moon: The Films of Satyajit Ray is a massive retrospective, “one of the most important and influential bodies of work in international cinema … includes a raft of restorations and rarities,” according to the press release.

This series is special in so many ways. It’s special because the films themselves are so good, and so illustrative of a style of humanism in filmmaking that is long out of fashion. The first time I saw Pather Panchali (1955) — the first film Ray made, and the first of his films that I saw — my jaw was on the floor. I had never seen anything so lifelike and natural on the screen before. It’s a stunning achievement and to me possibly the best film ever made. It’s also the first in the Apu Trilogy of films (The World of Apu is the last).

It’s special because of the community it is creating among film-goers. Carol told me she was in India in 1969 to visit her husband and travelled alone while he was working. She re-enacted an incident where a street beggar grabbed onto her leg as she tried to walk away, laughing at the darkly comic memory. I also met a man who travelled widely in South India in the 70s collecting art and artifacts, which he has since donated to the Royal Ontario Museum.

And it’s special because the works of this giant of cinema were almost lost to the world due to film deterioration.

I was lucky to be at several screenings with special guests who spoke before the film began. Prior to the screening of Charulata, University of Toronto Lecturer Kathleen O’Connell examined Ray’s status within both Indian and world cinema, and the profound influence Bengali Nobel laureate Rabindranath Tagore had on Ray. It was interesting to find out that Ray was an illustrator who worked in advertising, and that he exerted a great deal of control over all his films, from designing costumes and sets to editing and and illustrating the posters (as well as directing of course).

Michael Pogorzelski, who is with the Academy of Motion Pictures Arts and Sciences Film Archive, spoke at the start of Three Daughters (Teen Kanya, 1961) about the lengthy and painstaking process of restoring the entire Ray oeuvre. It was a monumental task.

Trailer for The World of Apu

“In 1992, the Academy Film Archive in Los Angeles heroically embarked upon the Satyajit Ray Preservation Project, a comprehensive program to restore all of the director’s work. Collaborating closely with the Satyajit Ray Society, a group of Ray’s former producers, the National Archives of India, the Merchant and Ivory Foundation, Martin Scorsese’s Film Foundation and the Satyajit Ray Film and Study Center at the University of California, Santa Cruz, the Academy restorations of Ray’s essential films (complemented by restorations from the RDB Corporation of Calcutta) ensure a sublime experience during this rare retrospective.” From the TIFF website.

Michael Pogorzelski showed us photos of what the films looked like before restoration. The hot, humid climate in India was literally eating the films. They were either disintegrating or covered in mould. For each film, a separate journey was required, to find the best print available as in some cases, the original negative was lost.

As well as the Apu Trilogy of course, I particularly loved Teen Kanya, an anthology of three short films commissioned for the centenary of Rabindranath Tagore’s birth centenary. Each of the films is based on a Tagore story, and each centres around a woman or girl. The Postmaster, Monihara and Samapti were all good, but I loved Samapti, which features actor Soumitra Chatterjee, who I thought was astoundingly natural and moving in this film and The World of Apu (he plays the grown up Apu). Monihara is a ghost story, and the film was almost lost, until the Satyajit Ray Preservation Project rescued it.

The series is running all summer long, and includes 34 films in total. It is accompanied by another series, about how foreigners see India. Passages to India: India seen by Outsiders, includes a couple of my favourite films: The River and Black Narcissus.

Watching films about India and by Indians is a good way to begin to get to know this spectacularly colourful and complex culture. I also recommend reading books, too, and I have several resources on Breathedreamgo to get you started.

READ MORE POSTS ABOUT MOVIES AND BOOKS ON INDIA 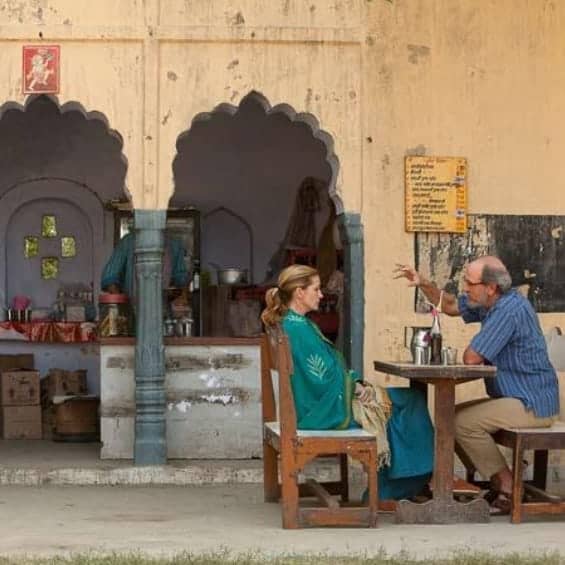 This website uses cookies to improve your experience while you navigate through the website. Out of these, the cookies that are categorized as necessary are stored on your browser as they are essential for the working of basic functionalities of the website. We also use third-party cookies that help us analyze and understand how you use this website. These cookies will be stored in your browser only with your consent. You also have the option to opt-out of these cookies. But opting out of some of these cookies may affect your browsing experience.
Necessary Always Enabled
Necessary cookies are absolutely essential for the website to function properly. This category only includes cookies that ensures basic functionalities and security features of the website. These cookies do not store any personal information.
Non-necessary
Any cookies that may not be particularly necessary for the website to function and is used specifically to collect user personal data via analytics, ads, other embedded contents are termed as non-necessary cookies. It is mandatory to procure user consent prior to running these cookies on your website.
SAVE & ACCEPT
3 shares
3 shares