You are here: Home / India / The world is watching her 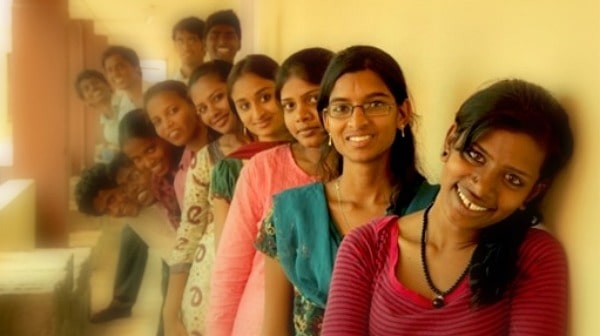 The girls in ‘The Backward Class.’

THE TWO MOST prominent news items from India in the North American media recently were the sweeping election win for Narendra Modi and the BJP party in the world’s biggest democratic election; and the horrific rape and murder of two teenage girls, who were left hanging from a mango tree, in Uttar Pradesh.

Ever since the high profile Delhi Gang Rape in December 2012, the status of women in India has been under the spotlight, not just in India but around the world. I was in India during the paradigm-shifting backlash to the rape of the 23-year old medical student aboard a moving bus in Delhi and it affected me very deeply. It affected everyone very deeply. There were riots and calls for changes to the law and changes to attitudes towards women.

The deeply felt need for change was one of the reasons that the long-time ruling Congress party was ousted, in a landslide victory for Modi and the BJP. People in India are fed up with corruption, inefficiency and oppressive attitudes towards women and people from the Other Backward Class, including Dalits (formerly called Untouchables).

India is caught in the throes of great change, and certainly the new government has a huge number of massive challenges on many fronts, including the economy, national security, poverty relief, environmental degradation. But what the world is watching most closely, in my view, is the way India handles violence against women and women’s rights to education, opportunity and safety. 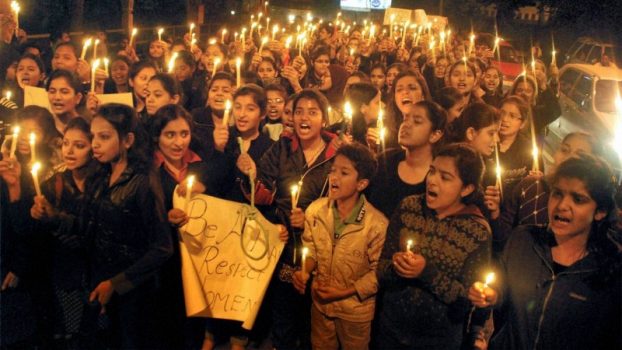 Massive protests erupted in the streets of Delhi.

The protests and the fast-track courts are a step in the right direction. In less than a year, the four surviving adult perpetrators of the Delhi Gang Rape were sentenced to death by hanging; and the villagers in Uttar Pradesh would not leave the scene of the crime, staging a sit-in under the hanging bodies of the girls until officials took action. (Several police officers were fired and one was charged with the crime within a day or two of the murders.) After the Delhi Gang Rape, the city erupted in mass riots that continued for weeks. This is better than can be said for many countries around the world with terrible rates of rape and violence, including western countries.

But of course India has a long way to go, and this story of violence against women in India — whether it’s against local women or foreign tourists — has captured the world’s media. There are much worse rape statistics for many other countries including Kenya and South Africa, and more female tourists raped in other countries, but for whatever reason, the media is now equating rape and India, and closely watching how the progression of women’s rights unfold. I have my own ideas about why the media insists on equating India with rape — ideas rooted in colonialism, racism and a penchant for pointing the finger at other societies rather than facing problems in our own — but that’s a whole other story and an article I will one day write. In the meantime, you can read Look westward in disgust for a courageous look at this particular example of media sensationalizing.

So, it’s against this backdrop that I recently watched two movies that highlight the challenges facing women and people from disadvantaged backgrounds, lower castes and Dalits. They are both equally well made films, highly watchable and important. And, interestingly, both made by Canadian women. First up, The World Before Her; followed below by a review and interview with the makers of The Backward Class, which recently won the 2014 Hot Docs Audience Favourite Award. 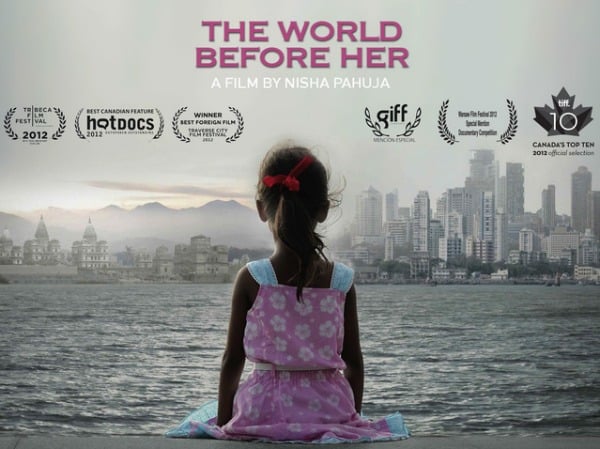 The World Before Her

Canadian filmmaker Nisha Pahuja spent years making the documentary film, The World Before Her. And you can tell. She gained intimate access to the worlds — including the hopes, dreams and emotions — of two very different young women in India. One, Ruhi Singh, 19, is a Jaipur girl intent on winning beauty pageants, and the film follows her to the Miss India Pageant. And the other, Prachi Trivedi, 24, is a Durga Vahini activist. (The Durga Vahini (DV) is the women’s youth wing of the Vishwa Hindu Parishad.) In both cases, Nisha gained behind-the-scenes access to both the pageant and the camp; as well as into the family homes of both girls. The result is a riveting picture of the narrow opportunities for women in India, and the confining dictates of tradition and culture. Though the girls could not be more different, the similarities in their stories are eye-opening.

The film won the Best Canadian Feature Award at Hot Docs in 2012, but that was just the start of the journey for The World Before Her. After showings all over the world, Nisha wanted the film shown in India. Encountering many obstacles, she started an India Campaign, which included a Kickstarter campaign to raise funds to get the film shown in India.

That’s when I got involved, I donated to the Kickstarter campaign and was thrilled when they met — and exceeded — their goal. And then I went to a fundraising screening for the film and participated in a Skype interview with Nisha, who is from Toronto, but currently based in Mumbai. Nisha talked about the making of the film and her passion and integrity came through loud and clear. She is a thoughtful, dedicated documentary filmmaker and I became an instant fan.

The film opened in India on June 6, 2014, and my hope is that many people see it, talk about it, write about it, and that it helps affect change. Please, if you are reading this, share the Facebook page, Twitter  and YouTube channel for it, and get people watching and talking about it. It’s films like this one that will help attitudes in India change and give millions of girls and women a better life.

The World Before Her India trailer

The other excellent India-related film I saw recently was The Backward Class. It won the Audience Favourite Award at HotDocs 2014, and I was there for the final screening. This film was made by Madeleine Grant, a Canadian filmmaker who travelled in India and volunteered at Shanti Bhavan, a very special school near Bangalore for Dalit children from poor families. Shanti Bhavan is unique in that it provides excellent quality education to a small, select group of children who would otherwise get little to no education at all. The film follows the first 12 students — six boys and six girls — to graduate from Shanti Bhavan as they study for the Indian School Certificate exams, which will enable them to pursue higher education.

It’s a story filled with drama and tension as the students face tremendous pressure to succeed from all sides. They are tasked with making history, proving the school is viable and worthwhile and hoping to be able to someday support their families, and raise them up, by eventually landing well paying jobs. While the sub-themes of the film are important social causes including the deeply entrenched caste system, poverty and a complete lack of opportunities for underprivileged children, the reason this film succeeds is the against-all-odds story and the disarming charm of the students themselves. 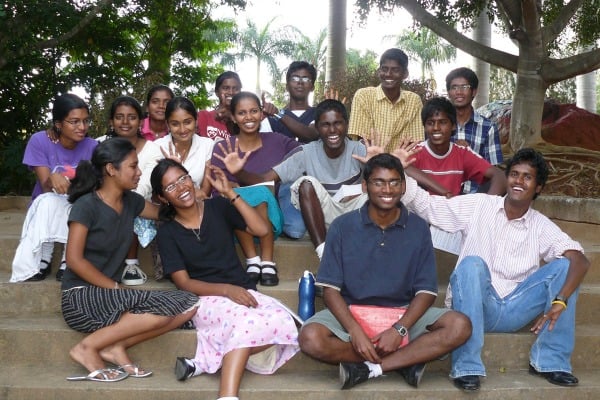 The brave, hard working students in The Backward Class.

The Backward Class follows several of the students in particular, including charismatic Mala and hard-working Vijay. Both were actually in Toronto for the film’s premiere at Hot Docs, and I sat down with Madeleine and Vijay after a screening and talked to them about the making of the film, and how the process was both a labour of love and an organic unfolding. Madeleine and a small crew shot for several months in India over the course of several years at Shanti Bhavan, where she had previously volunteered as a teacher. “I didn’t know how it would turn out,” Madeleine said. “It was in the editing process that the story came into focus.” 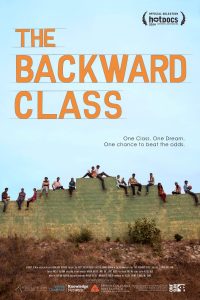 The film reveals the struggles the students face, and even takes us into their very modest family homes. And it also shows the pressures the dedicated and passionate school founders and teachers are under to raise funds for the school and to deliver on their promise of a better life for the students. You really get the sense they are all in this together, and by the end of the film, you are cheering them along, caught up in the drama of their fight to succeed. In fact, this is one of the reasons it one the Audience Favourite prize, no doubt. The majority of the students made First Class, went on to top-quality universities and are now working at global firms. Vijay is at Goldman Sachs in Bangalore, Mala is at Ernst and Young.

Madeleine told me she really enjoyed travelling around India, and loved living and volunteering at Shanti Bhavan. Like me, she is aware that so many of the international stories about India are negative, and she wanted to make a positive and hopeful film. She more than succeeded.

This warm-hearted and inspiring film shows what can be done, how even age-old systems can change, and what happens when you believe in someone and give them a chance. It’s a very inspiring film and I totally recommend watching it if you get the chance. If you want to  support Shanti Bhavan, check out their website for volunteer or other support opportunities at Shanti Bhavan Childen’s Project.