You are here: Home / India / The puppeteer and the magician’s ghetto of Delhi 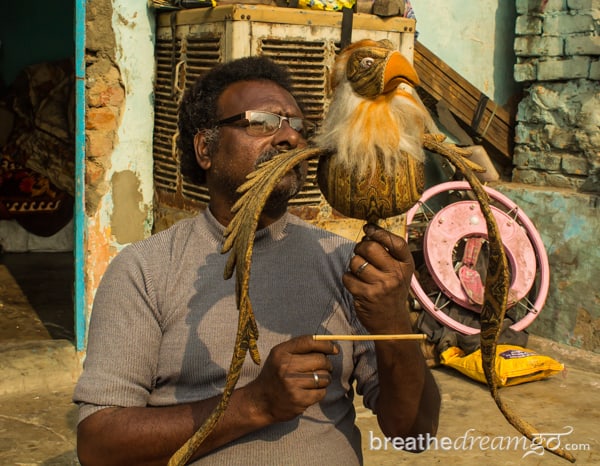 WE WALK THROUGH narrow, twisting alleys, stepping carefully over open sewer drains, as we try to keep up with the young man who is leading us to the home of Puran Bhatt, one of the most well-known puppeteers in India. This is a place where neither GPS nor Google can guide you. It’s the Kathputli colony – the artists’ ghetto of Delhi – and we are most definitely off the map. 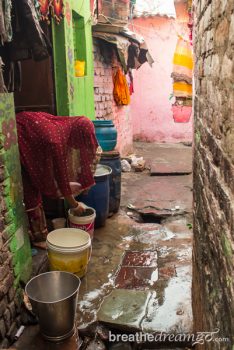 I notice the astonishing narrowness of the lanes, a rising stench from the open sewers, the cramped quarters that force women into the alleys to cook and clean and children to play in crumbling and dilapidated structures. It’s a cool-ish, sunny winter day in Delhi, and I wonder what it would be like here in the heat of summer or during the monsoon rains. I try to reserve judgment, but the thought comes to me: I wonder how hellish this slum could become under those conditions.

We round a final corner and enter a low-roofed building where women are cooking over an open fire and washing clothes in a bucket. Water sloshes across the cement floor under our feet as we ascend a tiny staircase up to the roof. There sits Bhatt, on a relatively spacious and airy terrace, a puppet master who is clearly lord of his domain. Large and round, with a commanding presence in spite of wearing baggy sweatpants and a mended sweater, Bhatt is a man on a mission: he’s determined to save his home and workspace from bulldozers.

Read how a chance online encounter led to my my visit to the Kathputli Colony in Will magic disappear tomorrow.

When Bhatt and his family, along with the other puppeteers, magicians, acrobats and artists of the Kathputli colony originally settled here 50 years ago, the land was fallow and vacant. But as Delhi has grown around them, real estate prices have surged and they now find themselves on a desirable piece of land only a few blocks from a shiny new metro station. It was only a matter of time before developers would start eyeing the colony, depicting it as a slum and offering to build a gleaming, hygienic alternative.

“I’m a traditional puppeteer, and I also do contemporary theatre,” Bhatt says as he introduces himself to us on the roof of his home. “It’s all I have ever known, I was born into a family of puppeteers and I have no other skill.” 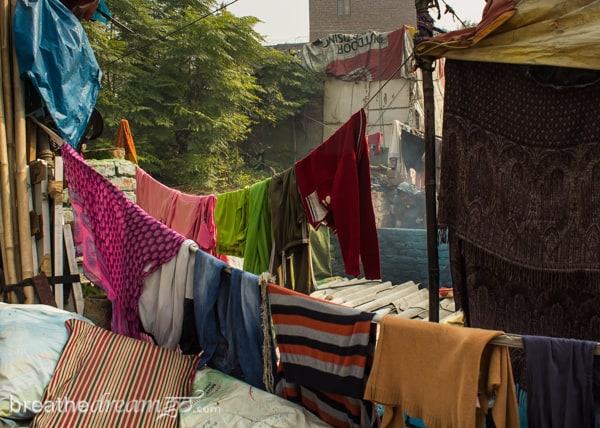 As we talk, I notice the world of Kathputli around us, laundry lines more numerous than tree branches, rooftop structures pieced together with plywood, tarp and string and the screams and cries of children playing. It’s a crowded, noisy, bustling world, far from the sanitized and spacious western ideal of home and community. And yet, to the thousands of residents, this is home. And the place that inspired the magician’s ghetto in Salman Rushdie’s masterful Midnight’s Children.

“This is my workshop, my office, my home, everything is stored here – this place is everything. You can see there is one house only for the puppets,” he says, and points to the storage rooms behind him. 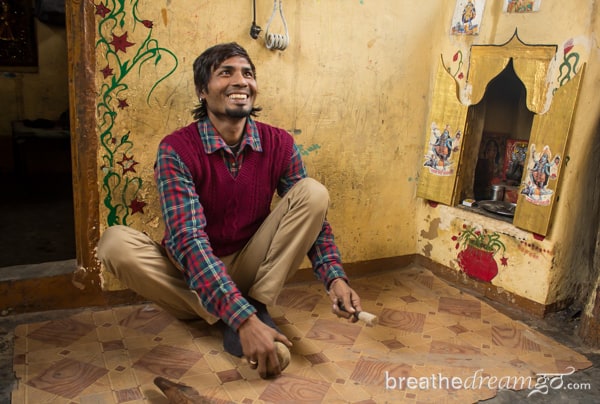 There are about 3,000 families living in the Kathputli colony, and all work in the performing arts, Bhatt explains. “We are artists, not poor persons, not servicemen. Our work starts in the evening, finishes late at night. We live like gypsies.”

Bhatt tells me in no uncertain terms that he believes the plan to move the Kathputli residents – the developers call them slum dwellers – into transit camps, and then modern flats, will kill their arts.

“Definitely after one year of living in these flats, the art will be finished. Everything will be clean, egos will develop, styles will change, flat prices will go up, they will sell the flats, and there will be no need to work as artists.”

And this is precisely why Bhatt and other artists have been fighting back. A contingent of outspoken residents circulated petitions and sought legal advice to stop the forced relocation, and encouraged others in the colony to resist signing an agreement to move. 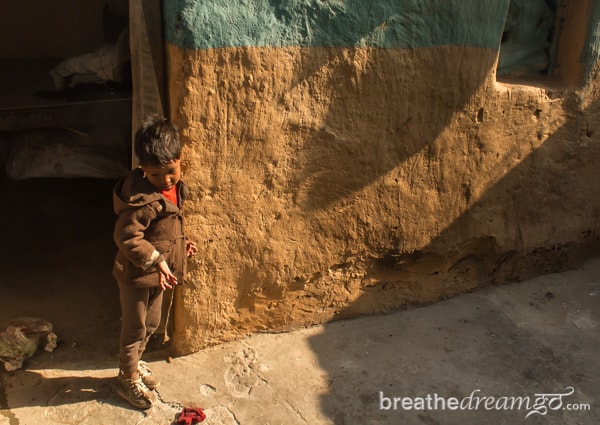 The Kathputli cause has also attracted considerable media attention and ardent supporters in India and around the world, including a couple of young American filmmakers, Jimmy Goldblum and Adam Weber, who made an award-winning documentary about the battle called Tomorrow We Disappear, starring Bhatt. I learned about the film during the Kickstarter campaign to finance it. I contributed a small sum, was sent a “magic ring,” and found myself engaged with the story, and the improbable cause. (You can read amore about this in Will Magic Disappear Tomorrow.)

At a screening of the film in Toronto, Adam Weber said that Midnight’s Children was his favourite book. In 2010, he Googled magician colony, and saw a tiny squib that mentioned the Kathputli Colony. Then he met a magician on Facebook who said he was from there. That was enough to intrigue both Weber and Goldblum, and to get them started planning a trip to India. The success of the film — the awards and press coverage it’s received — has helped highlight the Kathputli cause, and put it in the spotlight.

I ask Bhatt if the film helped his cause. “Tomorrow We Disappear definitely helped, and so has all the media attention. People are not calling it a slum anymore, but an artist colony.” 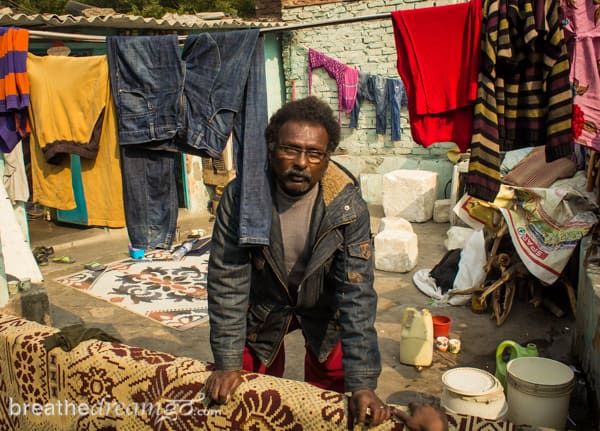 Bhatt is just as passionate about preserving the traditional arts of India as he is about saving his community from demolition. “We would like to see an artist village developed, where we can live, and many different traditional skills can be preserved and taught, with performances in the evenings. A lot of kids don’t even know what a puppet is today. So we also need to educate people about these traditional arts.”

He gets excited when we start talking about having a showcase centre for visitors in central Delhi and proudly shows us a design and blueprint. As he’s laying out his blueprints, one of his sons serves us tea in small china cups, remarkably delicate for such a boisterous and rough-and-tumble place. 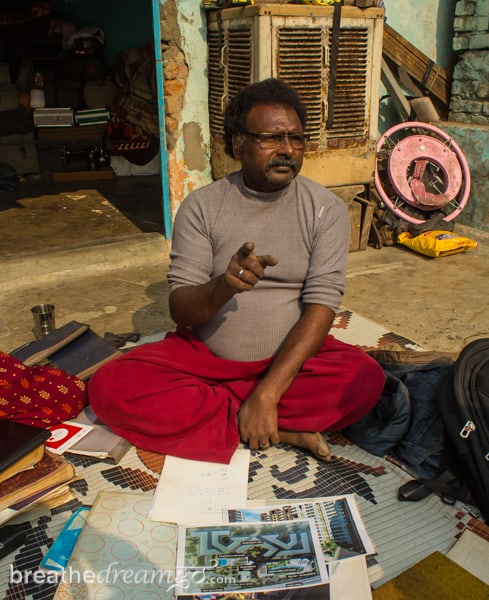 His design includes a school and hostel so people can come and learn the traditions. “A proper global centre,” he says in Hindi, and I can hear ‘Taj Mahal’ in the stream of words. His plans involve creating a village-in-the-city, where the artists live, teach and perform. At the centre is a large theatre where people could come and watch performances by the puppeteers, acrobats, musicians and other artist residents. I remark that it looks like the Globe Theatre, from Shakespeare’s time, and he laughs heartily, “Yes, same idea!”

Bhatt is sharing his dream with us, a dream he has thought about, planned, showered with detailed attention and loved.

After we say goodbye to Bhatt, one of his sons takes us on a tour of the colony as we leave. I now see Kathputli differently. Instead of dirty drains and dank alleyways, I see busy people living in small but often very tidy homes – some decorated with traditional designs – and a community of artists working together to preserve both their arts and their lifestyle. 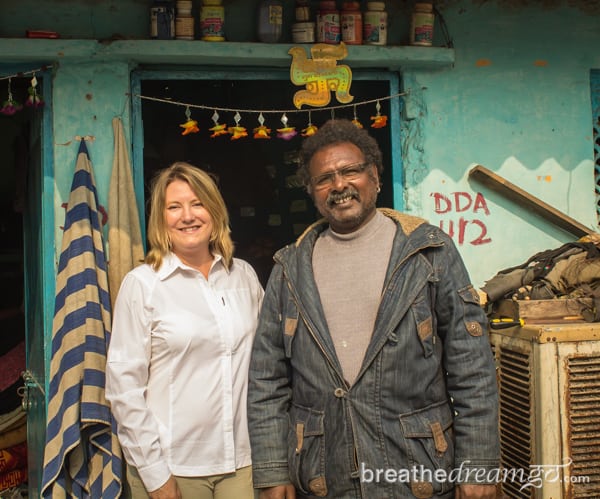 Me and Puran Bhatt in the Kathputli colony

A few months after my visit to Kathputli, I was delighted to learn that the forced relocation and demolition of Kathputli has been halted. Several reasons have been put forward. For one, a scam was uncovered that revealed developers had paid much less than the land was worth, suggesting corruption. For another, Delhi’s governmental land-holding agency (Delhi Development Authority) declared the rehabilitation scheme a failure, and proposed a new plan, which will require that 70% of the residents must have buy in before any rebuilding can move forward. I prefer to think it was magic that saved Puran Bhatt’s home.

[NOTE: A version of this story appeared on BBC Travel as The puppeteer who saved a slum.]