You are here: Home / Destinations / Arriving in India – for the fifth time 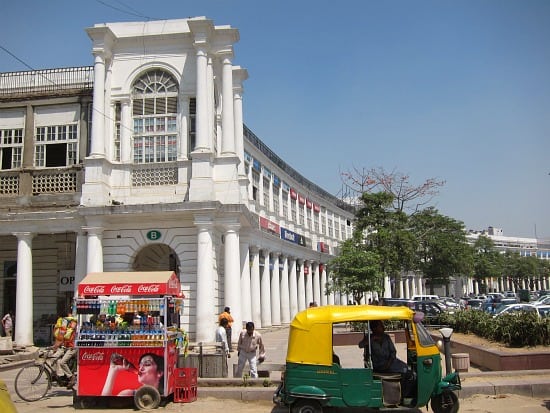 Landing in Delhi: The old and the new

My fifth trip to India started, as they all do, at the Delhi airport. This time, though, I arrived at the new airport, which looks like any modern airport. I was almost missing the “old shed” – my nickname for the old airport – until I arranged for a prepaid taxi and was met with the usual chaos and confusion of finding my taxi, and the usual scenes of Delhi street life and traffic on the way to my “home” in South Delhi. My driver was caught behind an autorickshaw and when he finally pulled up beside the auto, my driver let out a stream of abuse at him in Hindi. Nothing really changes in India, though a lot of Delhi was improved and refurbished for the Commonwealth Games.

My first few days in India were spent reuniting with my Indian family, seeing some friends, experiencing synchronicity and suffering extreme jet lag. During those first days in Delhi, I also met India’s most highly esteemed Vedantic scholar / teacher, Swami Parathasathy, attended the National Tourism Awards and the Tiger Conference, shopped, had an Ayurvedic treatment and had tea at the Taj Mansingh Hotel with PR director Kirti. It was a busy week and I was dog-tired – but Delhi is such a happening place, it is hard not to get caught up. It’s the political centre of the country, of course, and a cultural hub. Mumbai may have New York-like frenetic energy, but there’s enough going on in Delhi to keep just about anyone very occupied indeed. And it’s so much more pleasant to be in Delhi this year, with all the construction of last year finished and the new metro system operating. 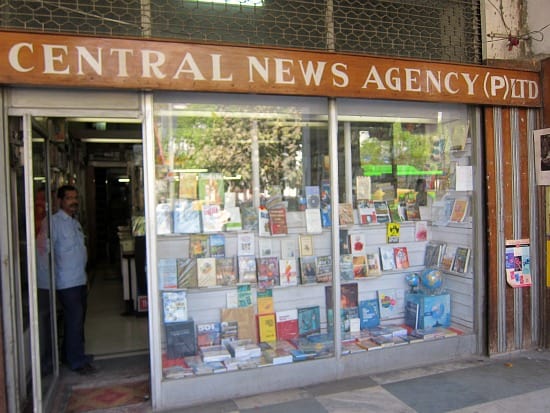 I also found those first few days a bit disorienting. I could see I was in India, but I wasn’t feeling it yet, so everything had a slightly unreal quality. But a series of coincidences and chance meetings helped to make me feel more at home. I felt a sense of familiarity, of course, because I have spent probably five months  in Delhi, in total, and because I have been going back to the same places over six years; but more importantly, I felt part of a network, a web of friends, colleagues and connections created over the years. I felt welcomed by India, even as I was suffering jet lag and disorientation. I just allowed it all to happen, all the riot of feelings, sensory overload, tiredness, confusion. I connected to the Indian notion that I am not in control, that there is a bigger force, a destiny, at work. I find India creatively stimulating, spiritually inspiring and a great place to just BE! In other words, I just decided to go with the flow, which is by far the best thing to do while in India. You can figure it all out later if you must.

In the new and improved Delhi

On my second day in Delhi and India, my friend Venkat told me that the esteemed Vedantic teacher Swami Parathasathy was giving a series of five lectures, over the course of five nights, on the last chapter of the Bhagavad Gita. I first heard about Swami Parathasathy in 2006, on my first trip to India, from a man at Shinshiva Ayurvedic resort in Kerala. He spoke so highly about his “guru” that I felt I must one day find out more about him, and – though it took five years – it was effortless when it finally happened. Though I was tired, I decided to go and meet Venkat at Kamani Auditorium in the centre of Delhi. In the past, my decision may have been different because getting around entailed expensive, dusty and unreliable taxis, battling gridlock traffic and inhaling noxious fumes. But the shiny new metro now runs through South Delhi – it was one of the last lines to open – connecting it with the rest of the city, and travel is now seamless, smooth, inexpensive and comfortable. I was delighted to discover there is a metro stop quite nearby, just a short autorickshaw ride away, and a Ladies Car leads every train. 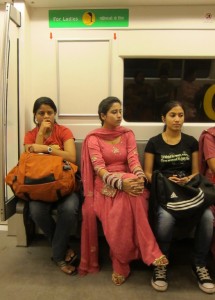 The Ladies Car really is a godsend because the trains get crowded, overwhelmingly with men, many of whom stare mercilessly. It can be unnerving. Men are not allowed in the Ladies Car – they are subject to a 200 rupee fine – but of course that does not stop the odd one. One day, I asked a man to move so I could sit down. He sullenly left, due to the social pressure, but it seemed he did not want to give up his seat. Some Indian men are very courteous and some are very not. There are also seats on every train reserved for the elderly and physically challenged. Taking the metro system many times over the first few days I was in Delhi, I was bemused to see many people are not really accustomed to the modernity of it yet. They jam the doors, pushing in before people get off, and I have seen quite a few people have trouble getting off the escalators.

On my way to the lecture, I was changing lines at one of the busiest metro stops and bumped into a Canadian woman I used to work with, years ago. It was the first of a series of surprising and serendipitous meetings.

I found Swami Parathasathy to be a very compelling, charismatic, likeable speaker and obviously extremely learned. He knows the entire Bhagavad Gita in Sanskrit backwards and forwards, but what makes him such a good teacher is that he is entertaining and uses real life examples to make points. He takes both a serious and light approach to his subject – which really is a winning combination. He said that god is like the fuel in a car. And he used pole-vaulting as an analogy for increasing spiritual awareness. I liked his explanation for Namaste: he said when you bring two hands together, you are saying we are one, and I salute our oneness with god. 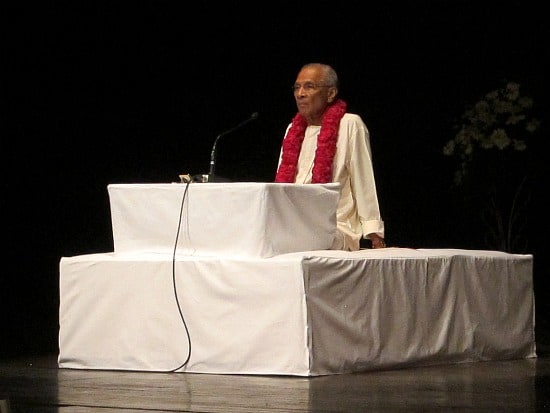 Listening to him, and to the four women who were chanting each of the verses, I was again reminded of the spiritual truths that I find so comforting and invigorating – and that I so often forget when I am home in Canada.

Frankly, I think it must help to have a spiritual sense when you are traveling in India. It seems to me it would get tiring to constantly feel self-righteous and judgmental about the poverty, social inequity, street kids, sickly animals, mounds of garbage and everything else you see. But understanding that “god knows what’s best,” that we are all part of one god-consciousness, and that the locus of reality is not rooted in our  sensual and temporal experience of life all helps to let the experience flow as painlessly as possible. Which is not to suggest resignation. Personally, I feel I have a duty and obligation to increase my consciousness as much as possible.

Swami Parathasathy founded a centre in Maharashtra that offers a three-year Vedantic course that runs without any breaks. The claim is that the program is structured so well that you don’t need a break. 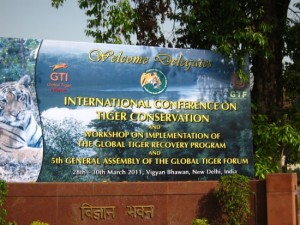 A tale of two media circuses

On Monday, March 28 I found myself at the centre of Indian political life. In the morning, I attended the Tiger Conference, thanks to my friend Ananda Banerjee, at Vigyan Bhavan in central New Delhi, the leafy spacious city built by Sir Edwin Lutyens to house the British Raj. The first session was open to the media, and I registered on my way in. The small room was absolutely packed with people, which made me wonder whether the government takes tiger conservation seriously. Or perhaps they had underestimated the interest in this issue. It didn’t seem like a good sign. The first order of business was to release the 2010 census figures for the tiger population in India. The census is taken only every four years so it was a big deal. The news was good and bad: the tiger population is up, but habitat has decreased significantly. (I will write much more about this news and about my visit to Ranthambhore tiger reserve in an upcoming post.)

The world’s media seemed to be at this event, and a lot of Indian media too, of course. I finally met Canada’s Stephanie Nolen – she is the Delhi correspondent for the Globe and Mail, Canada’s national newspaper, and a very fine writer. Here is her report on the Indian tiger crisis, The failing fight to save India’s tigers. 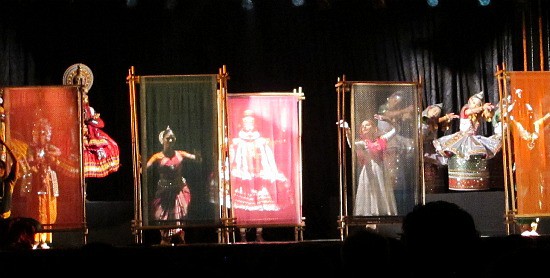 Later in the day, I went to the Ashok Hotel where the home ministers of India and Pakistan were meeting. There was a lot of media there, too, though all of it Indian; and a lot of militia. I was at the Ashok for the National Tourism Awards, a normally sober event that became a media circus because one of the guests of honour was the house speaker and the other was Bollywood queen Priyanka Chopra. She is lovely, but the highlight of the evening for me was a spectacular dance performance that combined six dance troupes, dancing in six styles, from different regions of the country. It was a tour de force, and I found it completely captivating. It’s also very nice to be in a large room full of people who are trying so hard to promote tourism to India and highlight the beauty of the country and the culture. This event had more than double the media of the home ministers and the tigers put together. There is nothing like Bollywood to whip up excitement in India. Okay, there is one other thing: cricket.

I landed in India just in time to witness the final games of the Cricket World Cup and watch captain MS Dhoni and his team battle their way to victory, beating arch rivals Pakistan, and then Sri Lanka on April 2 in Mumbai to win the cup. It was a thrilling moment when Dhoni hit a sixer to win the game. All one billion Indian hearts beat as one. Congratulations, team India. You deserved to win, and India deserves to feel on top of the world. 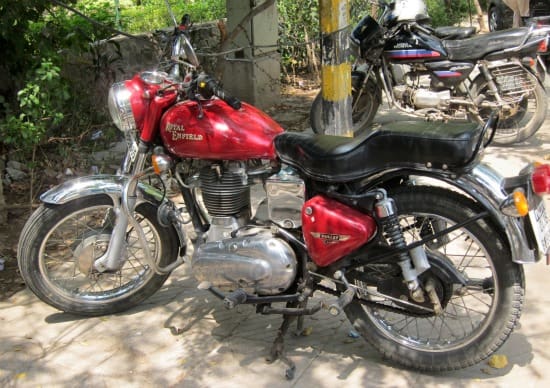 Buy Song of India, a collection of 10 feature stories about my travels in India. E-book version now only $1.99.